As one of the world's greatest new telescopes takes shape, preliminary results are looking good.

The Atacama Large Millimeter/submillimeter Array (ALMA) is nearing its planned 2013 completion, when it will become one of the world’s most powerful astronomical instruments. 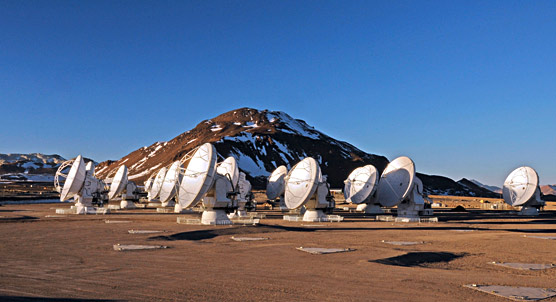 Nineteen ALMA antennas on the Chajnantor Plateau in a tightly bunched configuration.

It’s about halfway there already. Thirty-nine of ALMA’s 66 high-precision dishes, 7 and 12 meters in diameter, are in place on the 16,400-foot (5,000m) Chajnantor Plateau in the Atacama Desert of northern Chile.

Early science observations with the first few began last year. Most recently, operators successfully linked 33 dishes to work as a single unit, producing a millimeter-wave image of dense gas clouds buried inside the dust lanes of the radio galaxy Centaurus A (NGC 5128). 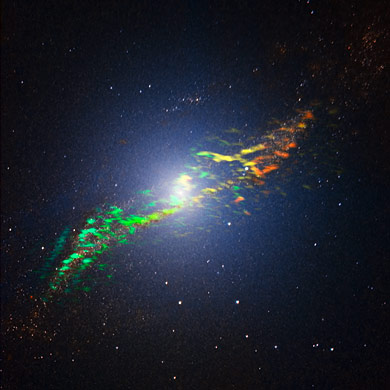 ALMA's millimeter-wave image of carbon monoxide clouds (green and orange) is superposed on a near-infrared image of the iconic galaxy Centaurus A.

Millimeter and submillimeter waves are in the poorly explored part of the electromagnetic spectrum between the shortest "radio" waves and the longest waves of "infrared light." In the view at right, an image taken at the carbon-monoxide emission wavelength of 1.3 mm (colored patches) is superposed on a near-infrared image of the galaxy (blue) in which the iconic dust lane is not seen. Cloud colors indicate redshifts and blueshifts; green is carbon monoxide moving toward us, orange is gas moving away, revealing which way the galaxy is rotating — and a mix of motions near the middle. 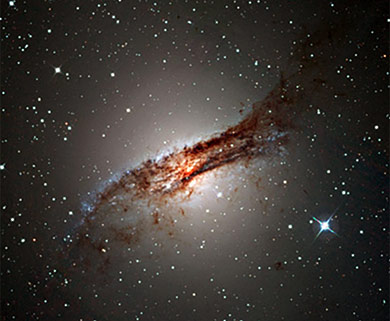 Centaurus A seen in visible light.

ALMA achieves its clarity and resolution by interferometry: piecing together the same individual wavefront as received by different dishes, which will be spaced up to 10 miles (16 km) apart when the array is complete. To correlate individual waves, the dishes’ relative positions must be known to a fraction of a millimeter, and their receivers must be synchronized to within a trillionth of a second.