It seems like spring hasn't officially begun for astronomy enthusiasts until the weekend of the Northeast Astronomy Forum (NEAF). Now in its 19th year, NEAF has grown to become the largest astronomy trade show in North America. This past weekend, roughly 130 vendors dazzled attendees with the latest and greatest telescopes, eyepieces, and virtually every other gadget you can imagine related to viewing the night sky. 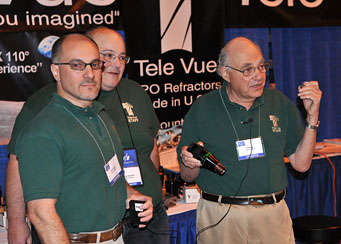 For the 12 years I've been attending, it seems Al Nagler of Tele Vue Optics opens the show by unveiling a new product that wows the crowd, and of course he didn't disappoint. Shortly before the doors opened to the public, Al and the rest of the Tele Vue crew rolled out three new tools for the discerning amateur. The one to generate the most buzz is the new Tele Vue 3.7-mm Ethos-SX eyepiece, which boasts an unprecedented 110° apparent field of view. I can't wait to look at the night sky through this baby! They also launched two new Paracorr coma correctors that will correct distortions in "fast" (low-focal-ratio) Newtonian telescopes down to f/3; one for visual and photographic use, and another built into a Starlight Instruments Feathertouch Focuser. 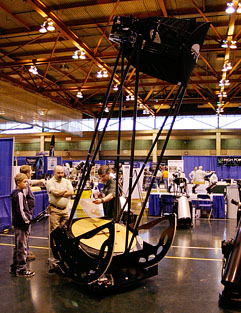 Touring the showroom floor is nearly an overwhelming experience — it's a good thing this show lasts two days! The largest scope we saw on the floor was a 40-inch (1-meter) Dobsonian reflector from Great Red Spot, priced at $59,000 and weighing 620 pounds (280 kg). This behemoth was followed closely in size by the new 36-inch Monster Dobsonian Telescope from Orion Telescopes & Binoculars. Orion's scope weighs in at 375 pounds (170 kg), comes with ServoCAT Tracking and and Argo Navis digital settings circles, and costs $55,600.

On the other end of the affordability scale, a lot of people seemed to be mulling over Orion's assaults on the $100 barrier: a 100-mm (4-inch) f/4 tabletop reflector with a paraboloidal mirror, two eyepieces, and red-dot finder, and an 80-mm f/4.3 refractor on the same mini-Dob mount, also with two eyepieces and red-dot finder. Both retail for $99.95 and weigh an easily-tossed-in-the-back-seat 6 pounds.

For the discerning astrophotographer, a number of premium imaging scopes made their debut at NEAF, including new offerings from PlaneWave Instruments, Deep Sky Instruments, Starizona, Takahashi, and Vixen. Meade Instruments used the opportunity to reintroduce its flagship instrument the MaxMount 20, a 20-inch (0.5-m) ACF catadioptric reflector optimized for imaging combined with a heavy-duty equatorial mount. 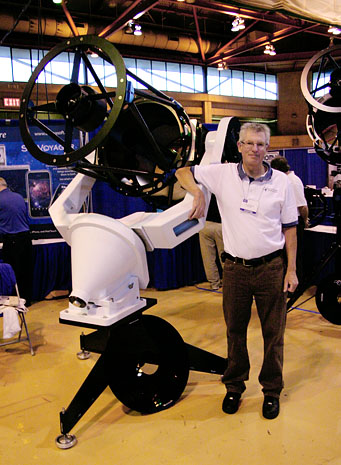 Speaking of telescope mounts, many high-end computerized German-Equatorials made their first appearance at the show. Software Bisque introduced its new Paramount MX, a lighter, more portable (yet still super-precise) version of its immensely popular Paramount ME, and also launched its anxiously-awaited TheSkyX Professional Edition software, which introduces total observatory and camera control into the mix. iOptron also unveiled its new light weight iEQ45-GTN German Equatorial go-to mount, along with the first production model of its heavy-duty iEQ75 that can carry up to 75 lbs. plus the required counter weights.

Some unexpected excitement happened Sunday afternoon. Four nights earlier, a brilliant fireball over Wisconsin had lit up the landscape for hundreds of miles around, making news across the Upper Midwest. The incoming object may have weighed about one ton; meteorite hunters immediately began racing to locate fragments. One of the meteorite dealers at NEAF announced over the PA system that a meteorite from the fall had just been brought from Wisconsin to their booth, and people crowded around to see an object so fresh from space.

While NEAF is primarily about the tools of the trade, the show also includes a full program of lectures. This year's keynote speaker was Alex Filippenko of the University of California, Berkeley, who gave a captivating presentation on supernovae. Steve Arnold and Geoff Notkin of the Science Channel's "Meteorite Men" show were on hand — Arnold was the one who showed up with the Wisconsin meteor fragments. Good catch, Steve!

Check out our extended coverage of the show — including the Northeast Astro Imaging Conference (NEAIC) that preceded the show — in Sky & Telescope's August issue.

When will you post the videos of new products at NEAF?

Haven't been able to get there for 5 years....came home with a stoney chondrite. 🙂

Can't you get cream for that?