Last Wednesday, January 28th, a group of astronomy enthusiasts gathered at Rancho Hidalgo, New Mexico, a few miles east of the Arizona border, to rededicate Clyde Tombaugh's monstrous 16-inch telescope. Just one of 37 instruments that Pluto's discoverer completed during his long and productive life, this mighty 16-inch f/10 reflector has a fascinating history. And a new chapter is about to begin.

In the 1930s, Tombaugh began grinding and polishing the 16-inch mirror during the twilight of his planet-hunting years at Lowell Observatory. But the project was set aside in the middle of that decade when he moved to New Mexico's White Sands Proving Grounds to begin a job on the ground floor of the nascent Space Age. 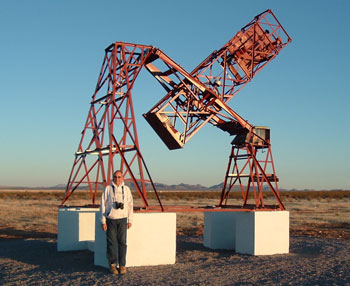 This gangly telescope structure was built by Clyde Tombaugh to hold a 16-inch reflector. It now stands in Rancho Hidalgo, New Mexico, with a destiny in education.

By the mid 1950s, Tombaugh had moved to the astronomy program at New Mexico State University, and his thoughts returned to the 16-inch telescope. He built a massive steel mount for it in his suburban Las Cruces backyard. Requiring about a ton of steel, the completed scope involved about 1,500 hours of labor. From the mid 1960s onward, Tombaugh used the yoke-mounted instrument to study the planets.

When Tombaugh moved to a new house in 1966, the telescope moved with him. Longtime family friend and colleague Jed Durrenberger related an aspect of the move that I included in my 2006 biography of Tombaugh. At one point the two men had to muscle the mount down a wooden plank. Durrenberger wasn't at all confident of success, but Tombaugh assured him that the plank would hold. When they started moving the mount, everything went well for a few seconds, but then it started sliding on its own, plummeting down the plank. The wood snapped, slamming the plank into Tombaugh's thigh and hitting Durrenberger in the chest. The mount landed safely on the ground, but it had left more than a memorable impression on the two friends. Tombaugh was notorious for carrying so much stuff in his pants pockets that Durrenberger referred to him as "a traveling toolbox." The plank's impact left Tombaugh's thigh with a visible impression of everything that was in his pocket.

The telescope's massive steel superstructure was so sturdy that Tombaugh made a decision not to put a structure of any sort around it — no dome, no sliding roof, nothing. The telescope simply stood outdoors against the elements with its optics protected by firmly fitting covers.

By the mid-1980s Tombaugh and I began a close friendship, which lasted the rest of his life. One evening we set up the 16-inch telescope to look at Saturn. The seeing was almost perfect.

"Clyde," I inquired, "can this telescope reveal the spokes within Saturn's B ring?"

"I'm glad to hear you say that," I added, "because I am seeing them right now."

After Clyde's death in early 1997, the family decided to sell the 16-inch telescope. After several false leads, my wife, Wendee, suggested to Gene Turner of the Arizona Sky Village, that the telescope might be a perfect addition to his growing astronomical community. Turner enthusiastically agreed, and the telescope was eventually relocated in 2008 to a new site he is developing at Rancho Hidalgo, New Mexico, about 15 miles east of the Arizona Sky Village. He plans to use it as the star of an educational program.

Turner loved and admired Tombaugh, and he shares my opinion that Pluto should remain a major planet. In fact, it's a covenant that people living at Rancho Hidalgo must accept Pluto as a major planet. And they're in good company. In 2007 New Mexico passed a statute declaring that Pluto is a major planet and that the day of its discovery, March 13th, will be "Pluto Planet Day" throughout the state.

I spent many hours with Tombaugh during his final years, and I was aware of his sadness over the potential demotion of his discovery. I believe that the science part of the man accepted what he believed was coming, but the human part never could. That's one of the reasons why I too support returning Pluto's status to that of a major planet.

Thanks, David, for such a fascinating piece of astro-history, concerning both the man *and* his machine! That it will survive him to bless the eyes of thousands is a befitting tribute!

Yet its amazing to consider that this scope, one completed, went into service when we were but "kids". And once i became interested in Astronomy & telescopes (~1970), the ones i & my friends drooled & dreamed of were of six-inch aperture, quite modest by today's amateur standards. Even further, today its quite common for people to purchase ready-made telescopes of Mr. Tombaugh's scope's size... altho of much shorter focal-length & lighter weight!

Truly, Amateur Astronomy has come a long way since the 1960's, and one can only wonder where it might be today if the trail-blazers like Clyde Tombaugh would've had today's media resources at their disposal.

Kudo's to all the efforts to get this wonderful & historic telescope back into service!

Dr.David, Wonderful piece of wriring. You bring alive the moments you spent with Clyde Tombaugh. For us little amateur astronomers who haven't seen [or heard] either of you greats, such articles are the only inspiration we get. Keen to see more articles from you.
Sincerely,
-Sathya Kumar

If memory serves I saw this scope posted for sale several years ago on Astromart. I took the initiative to contact the Kansas Cosmosphere to alert them to the instrument and encouraged them to acquire it. Too bad the birth state of Mr. Tombaugh did not end up with this. A loss for Kansas, but a gain for New Mexico.

I think you and others do Tombaugh a great injustice with such silliness as convents requiring people to accept emotional pseudo science. Frankly I would hope some who says they love educating the public and a popularizer of science would understand and espouse that science is above any one person. Friend or foe.

While I am sure you are used to running around getting nothing but platitudes, you'll get none here. I seriously doubt Tombaugh would have wanted anything other than the science facts to govern the science of Astronomy.

I hope if and when science 'debates' what is or is not a planet, no one person or persons is considered relevant to the outcome.