A new study simulating stars as they orbit a black hole might provide the best explanation for how the Andromeda galaxy grew its lopsided nucleus.

The Andromeda galaxy appears to have two nuclei for the price of one. Deep in the spiral galaxy’s heart, the clump of stars surrounding the supermassive black hole looks oddly oblong. In 1974 astronomers reported this weird elongation, noting that one end of the nucleus was brighter than the other. In the early 1990s Hubble Space Telescope observations resolved this stretched nucleus into two components, not one. 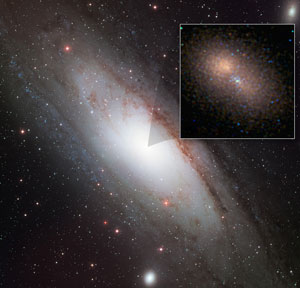 A close-up of the Andromeda galaxy's core (inset) by the Hubble Space Telescope shows what looks like a double nucleus but is probably an elongated disk of stars. The blue smudge between the nucleus's two lobes marks a ring of young, massive stars circling the supermassive black hole at the galaxy's heart.

Astronomers soon determined that this “double” nucleus isn’t really two pieces but just one lopsided disk of stars orbiting the black hole. Objects following elliptical orbits go slower in the regions far from the thing they’re orbiting and faster when closer to it (that’s Kepler’s second law of planetary motion). The stars in M31’s nucleus follow very elliptical orbits around the black hole, which means they spend most of their time shining in the far-out regions, making that area look bright — the first “nucleus,” called P1. The second “nucleus” (P2) exists because the stars bunch together when they race through their closest approaches to the black hole, which makes that sector look bright, too. The black hole is actually between these two points but closer to P2.

The lopsided disk picture has been in place since Scott Tremaine (Institute for Advanced Study) proposed it in 1995. But astronomers haven’t figured out how the stars wound up this way in the first place. A new study by Jihad Touma (American University of Beirut, Lebanon) and his student Mher Kazandjian (Leiden University, The Netherlands) might have the answer.

Touma and Kazandjian created a computer simulation of a circular disk of particles (representing stars) orbiting a 100-million-solar-mass black hole, about the same mass as M31’s central leviathan. Then they threw in another, smaller group of stars orbiting in the opposite direction of the disk and watched how all the stars’ orbits changed over time. They found that in less than a million years, the original disk became lopsided like M31’s. Not only that, but the retrograde stars moved to form a larger cluster shaped like a flattened ellipsoid around the disk. Hubble observations suggest such an ellipsoidal cluster actually exists in Andromeda around its elongated nucleus.

Tremaine says that the study is the most ambitious and realistic attempt so far to form an eccentric disk. He notes that having a disk with some stars going forward and some going backward isn’t as artificial as it might sound. Several galaxies have structures like this, and it’s natural that, in a disk of stars following a variety of orbits, some fraction of them might end up going backwards. Such a setup could arise due to a collision. While counter-rotating disks aren’t the only way to build the lopsided picture, the agreement between the team’s results and observations is “pretty impressive,” Tremaine says.

My question would be, how stable is this situation? Is it likely to continue like this for a long time, or will it return to a single-direction, symmetrical disk in a few million years? If several other galaxies are known to have similar formations, it seems that this pattern is either easy to create or somewhat persistant. I guess more simulations will be needed. I find it fascinating how much we can figure out using computer simulations. (Of course, starting out as a physicist and then working as a computer programmer, I might be just a tiny bit biased.)

Ok. That explains the lopsidity of the core. How about the symmetry of the outer parts? How does an intense star-forming region on one side of a spiral galaxy know it is supposed to mirror the same thing 100,000 light years away on the opposite side?

Ken, the setup is *probably* stable. They didn't run the simulation long enough to compare to the galaxy's age, but from the brief look they took the whole thing looks more stable than not. To Peter, I'm sorry I don't understand your question. Could you clarify a bit?

In other words Peter, she’s asking you to decrease your question’s quotient of lopsidity. 🙂

The computer model demonstrates that astronomers are looking at a lopsided disk in M31 that formed <=1E+6 years ago. The online report cited - 'The Doubling of Stellar Black Hole Nuclei' at http://arxiv.org/abs/1207.1108. The orbital period used in the computer model is 0.32 Myr or 320E+3 years per revolution. This is a short revolution period compared to the big bang model age for M31 of at least 10E+9 years old so the lopsided disk may be of a recent origin vs. stable over billions of years.