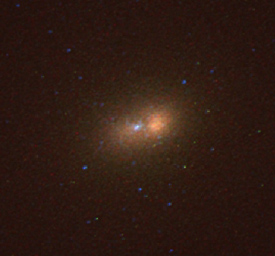 The Andromeda Galaxy, about 2.5 million light-years away, contains a black hole with the mass of 140 million Suns that has a strange disk (blue) of young hot stars within 1/2 light-year of it.

It's no secret that supermassive black holes are thought to dwell in the centers of most galaxies, but what might be less well known is that only two black holes have been directly proven to exist under there. Now, thanks to some blue stars in a very unlikely place, make that three.

The Andromeda Galaxy (M31) has long been known as a likely candidate for harboring a black hole. Its innermost nucleus emits the X-rays expected from an accretion disk of gas spiraling into one. In addition, for almost a decade astronomers have noted a mysterious blue light at the core. Using Hubble's Space Telescope Imaging Spectrograph (STIS), astronomers have now identified this blue glow as a flat disk of more than 200 young, hot stars no more than half a light-year from the nucleus. The stars' unlikely nesting ground gave astronomers the most solid evidence to date that the Andromeda Galaxy contains a black hole – and it's twice as big as they thought, weighing as much as 140 million solar masses.

Ralph Bender (Max Planck Institute, Germany), lead author of the paper published in the September 20th Astrophysical Journal, and his team measured orbital velocities in the star disk by the redshifts and blueshifts of its different parts. The hot, young stars revolve around the central black hole much the way the planets in our solar system revolve around the Sun. But these stars feel a much stronger gravitational pull and orbit with measured velocities averaging 1,000 kilometers per second. With such a close proximity to the center, this system required a central mass of 140 million Suns. And this mass is dark, so under these stiff constraints all other possiblities are ruled out, other than a black hole. "We think this has been correct all along," says John Kormendy (University of Texas, Austin) who in 1988 was one of the several astronomers to find evidence that M31 must have a central black hole, "but now we can exclude all other possibilities."

The theoretical "other possibilities" mainly involve a vast number of dark, dead stars somehow dumped into the center of a galaxy like a mass grave: neutron stars, brown dwarfs, or Jupiters are all pretty dark objects. But to create a dark cluster in the nucleus of M31 as defined by the blue star ring, it would be like crowding 140 million solar masses into a space the size of the Oort cloud (nearly a one light-year radius around the Sun). Such a dark cluster couldn't help but light up. "You just can't get away with it," says Kormendy. "The production of supernovae, stellar remnants, stars hitting each other – not good news. We would notice something like this. The alternative must really be true."

So far, dark clusters have been fully ruled out in two other black-hole candidate galaxies, NGC 4258 and our Milky Way. "This is a significant accomplishment for Hubble," says Kormendy. "It has been used to see over 30 possible black-hole candidates in other galaxies; now three have been confirmed."

Meanwhile, astronomers still can't explain how the ring of blue stars could form around the black hole in the first place. "With this little tiny blue cluster we have a dichotomy. On the one hand, you wonder why is it there, but on the other, you are eager to exploit it," says Kormendy.

The massive stars seem to have formed in a burst of activity about 200 million years ago. But current theories in star formation say that this is impossible. For a star to form, there must be enough gravity and pressure to collapse a cloud of interstellar gas. This shouldn't happen with strong tidal forces from the black hole trying to rip any large gas cloud apart. "Although we don't understand why they are there," comments Kormendy, "we can certainly use them."