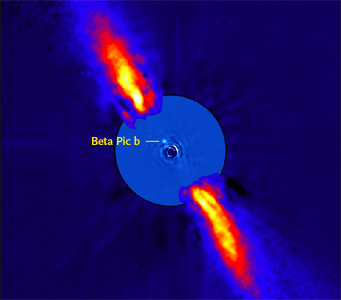 The star Beta Pictoris, at center behind the dark-blue mask, has a tiny infrared dot just northeast (upper left) of it and only a thousandth as bright. The star's light itself has been nearly canceled out here. Outside the mask are the bright infrared glows of Beta Pic's enormous disk of dusty collision debris, seen nearly edge-on. Click image for larger, labeled version.

ESO / A.-M. Lagrange and others

Last week two teams of astronomers, one using the Hubble Space Telescope and the other using giant ground-based scopes with adaptive optics, released what they called the first direct images of extrasolar planets orbiting other stars; see our article.

Not to be outdone, a French team today released their image of a tiny but definitely real speck glowing in the infrared 0.4 arcsecond from Beta Pictoris, a young star 63 light-years away. The speck is just inside the inner edge of Beta Pic's enormous, famous debris disk — a wide platter of dust that we see nearly edge-on.

The astronomers, led by Anne-Marie Lagrange (University of Grenoble), used one of the 8.2-meter reflectors of the Very Large Telescope array run by the European Southern Observatory at Paranal in Chile. The speck, glowing in infrared light 1,000 times fainter than Beta Pic itself, was resolved by means of severe image processing to eliminate almost all of the star's dazzling glare. Beta Pic is a naked-eye star shining at 4th magnitude in the far-southern sky near Canopus. It is a hot, white, type-A3 star eight times as luminous as the Sun.

Beta Pic b lies about 8 astronomical units from the star, roughly Saturn's distance from the Sun. This puts it much closer to its star than last week's directly-imaged exoplanets. Gravitational effects perturbing the debris disk had already suggested that a giant planet ought to be there.

Given Beta Pic's very young age (10 or 20 million years) and the new object's apparent high temperature (about 1,500 kelvins), it should have a mass of about 8 Jupiters, which puts it within the planetary category.

Unlike the four planets in last week's images, "Beta Pictoris b" has not been observed long enough for it to show any sign of orbital motion around its star — or even to show that it is traveling with the star across the sky ("common proper motion"). Even so, the chance that it could be a background object unrelated to Beta Pic is extremely slim.

And here is the team's discovery paper.

Beta Pictoris may be 1.8 solar mass, radius about 1.8 solar radii, effective temperature about 8052K so it could have a MS lifetime before evolving into a red giant of 1.6E+9 – 2.3E+ 9 years according to my astronomy spreadsheet. Using Beta Pic b as 8 Jupiter masses, semimajor axis = 8 AU and e = 0.1 (a guess), I get an orbital period about 16.82 years and instantaneous velocity (unperturbed) at 8 AU, about 14.13 km s^-1. These are interesting times for astronomy. Consider Fomalhaut, Fomalhaut b, HD 102272, and Pollux. All of these are said to have exoplanets yet the host stars plot quite differently on the H-R diagram, HD 102272 and Pollux being K0 giants and Fomalhaut spectral class A with a dust disk.

Interpreting from the conventional H-R diagram ages for HD 102272 and Pollux (K0 giants), both would have originated as MS stars similar to Fomalhaut more than 1 billion years ago and complete 4 or more galactic orbits to evolve into K0 giant stars today with exoplanets. The exoplanet orbits may change too as the stars evolve into K0 giants. These are critical assumptions underlying interpretations of exoplanet observations in stellar evolution theory.

Rod, you wrote that 11 years ago. Are you still interested in such things. I've been trying to track you down for a possible interview on Real Science Radio. If you're interested, please contact a producer there. And, S&T, thanks for such a great site!