NASA is full steam ahead in the development of its asteroid retrieval mission. 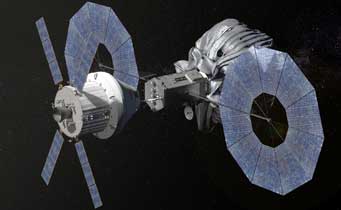 This conceptual illustration shows NASAâ€™s Orion spacecraft (left, with rectangular solar panel arrays) about to dock with the robotic asteroid capture vehicle (with circular solar arrays). The robotic vehicle would drag an asteroid to retrograde lunar orbit, where the Orion crew could fly out to it.

NASA isn’t exactly the Federation of Star Trek. But in their asteroid-snatch pitch last week to attendees of the American Institute of Aeronautics and Astronautics’ Space 2013 Conference, NASA associate administrator William Gerstenmaier (Human Exploration and Operations Mission Directorate) and his colleagues sure struck a Trekkie note — with epic music to boot. In sum? They want to boldly go where no one has gone before.

The space agency’s asteroid retrieval mission surprised a fair number of folks when announced in April. But despite ongoing Congressional budget stalemates, the NASA team was upbeat.

The basic mission concept has three components. One, search for small near-Earth asteroids that would be good targets. Two, send a robotic spacecraft to rendezvous with one of these asteroids, bag it, and drag it back to lunar orbit. Three, fly a crew out on the future Orion capsule to check it out.

The second two segments combined would take five years: 1.5 years for the robotic craft to reach the asteroid, three years to tow it back, and about 26 days for the roundtrip human visit. The asteroid’s orbit would be stable for 100 years, said Paul Chodas (NASA Near-Earth Object program), so there would be plenty of time for follow-up visits before sending the rock home. 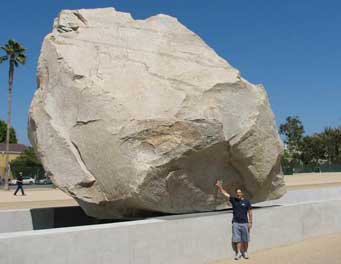 Dr. John Brophy, who in 2010 first suggested using solar electric propulsion to bring an asteroid back to Earth's system, stands with an exhibit at the Los Angeles County Museum of Art. The granite rock weighs about 340 metric tons and is roughly 6.5 meters (21 feet) in diameter, just under the size suggested as a suitable target for NASA's asteroid retrieval mission.

But the details of the asteroid-snatching scheme are still fuzzy. Mission planners don’t have a target yet; in fact, they’re still deciding whether to grab the 7- to 10-meter asteroid originally envisioned or instead pluck a boulder off a larger asteroid, such as Itokawa. Another idea suggested by William Bottke (Southwest Research Institute) and his colleagues is to target mini-moons, small asteroids that Earth temporarily snags as satellites. Earth picks up these bodies near two of the Sun-Earth system’s shallow gravitational wells, called Lagrangian points. Simulations suggest these bodies are fairly common, so mini-moons could be straightforward objects to target. The mini-moon suggestion is one of 96 mission-related ideas that will be considered at a workshop at month’s end. (You can read the abstracts on the workshop website.)

Gerstenmaier said they hope to have the game plan finalized by next February. Once they do, they can nail down the cost — which has a current ballpark estimate (sans launch vehicle) of $1 billion.

NASA is doing everything it can to keep costs at a minimum, especially given the climate in Congress right now. A lot of that effort manifests as pooling existing resources and research efforts from across the agency, from propulsion technology development (the robotic craft will use a ramped-up version of the Dawn spacecraft’s solar electric propulsion system) to the crew’s spacesuit design.

The agency is also pulling in science missions. WISE is being roused to help look for near-Earth asteroids, and Spitzer will join in to study two potential targets next year, Chodas said.

Gerstenmaier repeatedly stressed that the asteroid retrieval mission is not a destination mission. He summed the initiative into three points:

While good science might come out of the mission, that’s not the focus. It’s about pushing ourselves to the next level.

“You need to turn off that logical side of your brain, and you need to turn on that emotional touchy-feely side, the one you never use,” Gerstenmaier said. Jump up and down a few times, even pull out the breakdancing if you can (yes, he actually said that), and get your friends excited about this mission. “We’re gonna go grab a rock and move it here.”

How in the world can they snag any type of Celestrial Object, any return it to an object that will orbit Earth. Can I know there must be someone who can explain it to me....Please? Mike

Of all the projects NASA could set as a major goal for astronauts, this seems almost frivolous. Maybe, I'm as wrong as those who said that in the early 1960s about NASA's plan to land a man on the Moon, but I can't see any scientific OR exploration benefit in this. If there is a space version of bread and circuses for the unwashed masses, this is it.

I would so love to see a long-term goal of establishing a manned laboratory on the Martian moon Phobos. It is a ready-made space station in orbit around Mars, where astronauts could direct unmanned rovers exploring the Red planet in real time, which would vastly increase the scientific and exploration potential of said rovers. The necessity for huge amounts of fuel to effect a manned landing on Mars and takeoff therefrom would be obviated, as a Phobos mission would be more like a docking operation. We would avoid the cross-contamination issues inherent in a Mars mission. and could set up a laboratory (a la Spacelab) where Martian samples could be studied on Phobos rather than Mars, obviating a whole list of issues too lengthy to mention here.

To say nothing of the fact that for a number of different reasons, Phobos is extremely interesting in its own right.

Oh well, sweet dreams are made of these. Back to NASA's ultimate rodeo lasso, I guess....

This continues to be a sad time for NASA. This "mission" is a sad reflcetion of politics and lack of funding for NASA to do something meaningful. What exactly will the astronauts DO when they get to this asteroid? Take pictures? Grab some samples to bring home? Robotic spacecraft can do that far more easily and cheaply. I support the above post to go to develop the ability to go to Mars' moons or at least ORBIT MARS. This is merely something to do with Orion (decades late) to justify it and is an embarresing compromise of NASA's potential.

Following the discussions of the Augustine commission and its "flexible path" proposal, I was expecting that visiting asteroids would be an intermediate step towards Mars. Flight time would be shorter, but still take months, there are numerous targets in different distances, no lander is needed and science return is assured. The last step before actually landing on Mars could be a mission to Phobos. And now NASA comes up with this. Capture a large meteoroid (how do they dare to call this piece of rock an "asteroid"?) and bring it to Earth to have short flight time. Science return is not the focus, they say. I even read they consider capturing an old Apollo stage, if they cannot find the right piece of rock. Then, what is the focus? Moving rocks around in space? Or just subsidizing jobs in the space industry? I'm somewhat disappointed.
I'm almost 50 now and have more or less given up the hope of seeing people walking on Mars. At least, I lived to see people walking on the Moon. This was a historic moment never to be forgotten.

I agree with the others. This is a joke. Or something. Don't tell me let me guess. When they bring it back, they will eventually crash it into the moon, well before the 100 years, just like 4 other space craft they crashed into the moon so far. This project is so far out there and ridiculous, I can only wonder if there is something else to it that is not being disclosed to the public. Just imagine what more beneficial projects NASA could come up with, with a billion dollars. Bottom line is this whole project seem sketchy.

I'm of a different mindset on this story. This mission seems like the next logical step in manned space travel. It lets us gain initial experience with the Orion spacecraft, a craft designed for long duration missions away from the local Earth/Moon environment. It also gives us valuable experience in asteroid detection and deflection. The fact that we don't have to land on a large body, such as the moon, keeps the mission simple and relatively inexpensive (the moon landings cost $150 billion in today's dollars). Staying close to Earth for this demo mission also shows that such asteroid mining operations could be feasible for private companies. Remember, this is only a first step. Soon we can send the Orion to orbit Mars on a long duration test flight.

There’s little scientific value in it, because pieces of asteroids fall to Earth all the time. If it has commercial value as raw material for processing in space, then have a commercial enterprise pay for it up front. “You need to turn off that logical side of your brain, and you need to turn on that emotional touchy-feely side, the one you never use,” Gerstenmaier said. I hear words to that effect often on Sunday mornings, so I cannot argue with it. But that won‘t get funding on Capitol Hill. Question: can the bag-and-drag technology be scaled up to an asteroid big enough to damage Earth? If so, then it might be sold as a practice-run for collision avoidance. Otherwise, it’s a tough sell.

I'm not crazy about human space missions to start with, and this one seems particularly unfocused. If NASA had an unlimited budget we could invest in human missions just for the "emotional touchy-feely" rush. But the sad fact is that sending astronauts to an asteroid will consume a lot of dollars that could otherwise be spent on numerous robotic probes and space telescopes to do science.

I would have hoped that NASA could come up with something better than this proposal. I get the impression that current day NASA proposals are political concoctions that seem to be designed to preserve jobs at the agency rather than the result of visionary thinking. I would like to see significant government funding for a manned space program, but this is not a very good proposal. I think there is very little chance that Congress will ever fund this in its present form. I wish the leadership at the agency could come up with something better.