Telescopes, cameras, and eyepieces, oh, yeah! If it had anything to do with enhancing your interest in astronomy, chances are you could get an up-close and personal look at a new piece of equipment at the Pacific Astronomy and Telescope Show (PATS). 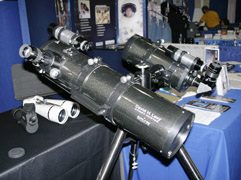 According to organizer Alan Guthmiller, roughly 1,400 amateurs flocked to the event, held at the Pasadena Convention Center in Pasadena, California, on the weekend of September 13–14. With more than 70 vendors, PATS is promising to be the premier astronomy trade show on the West Coast, and looks to be even bigger in 2009.

Mirroring NEAF last spring, Tele Vue kicked off the event Saturday morning by announcing the addition of two new eyepieces to its coveted Ethos line. The 1¼-inch 8-mm and 13-mm Ethos eyepieces will soon be complemented by a 6-mm, and a 17-mm in 2-inch format, all boasting the same whopping 100° apparent field of view.

There were plenty of other new products on display, including the quickly expanding series of refractors by Scott Roberts' new company Explore Scientific. What really caught my eye were its two new 6-inch Maksutovs; an f/4.8 Maksutov-Newtonian, and an f/12 Maksutov-Cassegrain, both sporting carbon-fiber tubes. 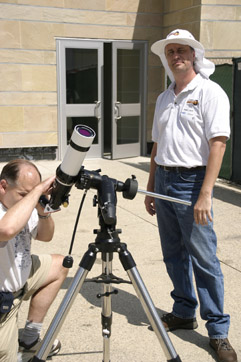 Andy Lunt of Lunt Solar Systems shows off one of his latest creations at PATS.

Other notable new toys to enhance your astro experience included a new series of triplet-apochromatic binoculars by Vixen. Farpoint Astronomical Research displayed a prototype self-centering dovetail system to ease the task of dropping your big scope onto your mount in the dark. Starizona had a new Hyperstar unit for Celestron’s 6-inch Schmidt-Cassegrain telescope.

Outside the convention hall, Lunt Solar Systems and Daystar Filters set up hydrogen-alpha solar telescopes for curious passersby to have a peek at our home star. Fortunately, the recently bland Sun produced a few small prominences to please those who took the time to catch a glimpse. 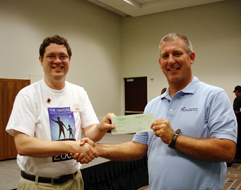 In addition to the plethora of gear, there were a number of interesting speakers throughout the event. Highlights included NASA astronaut Story Musgrave discussing past and upcoming Hubble Space Telescope servicing missions, documentary producers Robin and Todd Mason presenting excerpts from their upcoming PBS film The Journey to Palomar, and an inspiring talk by S&T contributing editor David Levy on his comet discoveries. Our new editor in chief, Robert Naeye, gave attendees an inside look at the inner workings of S&T.

An astro-imaging workshop hosted by the Riverside Astronomical Society preceded PATS on Friday. Blossoming astrophotographers received tips on improving their astro images from well-known masters such as Tony Hallas and Don Goldman.

I had got a dream to start my company, but I didn't have got enough amount of cash to do that. Thank heaven my close dude recommended to utilize the personal loans. So I received the collateral loan and realized my dream.