The Northeast Astro-Imaging Conference (NEAIC) kicked off Thursday here in Suffern, New York., featuring talks by many of the biggest names in astrophotography. At any given time during NEAIC there are three events held simultaneously. Needless to say, I've had to make some tough choices! 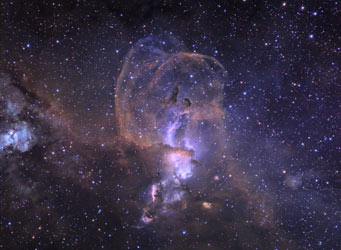 Yesterday I watched Ken Crawford give an inspiring presentation on achieving depth in your astro-images using advanced techniques in Adobe Photoshop. Ken's work never ceases to amaze me!

Later in the afternoon, I gained new appreciation for the nuances of giant-telescope design by listening to renowned optical designer and astrophotographer Peter Ceravolo. In a riveting session, he described his experience with huge field flatteners and CCD cameras.

I also heard R. Jay GaBany present his remarkable work collaborating with professional astronomers. Jay combines cutting-edge science with aesthetic imaging. If you ever get the opportunity to see Jay speak, don't miss it! You'll never look at your images the same way again.

Another one of the added bonuses of NEAIC is that attendees get a first look at new products from many of the major manufacturers and distributors such as Apogee, Finger Lakes, QSI, Software Bisque, and others. Some highlights include SBIG unveiling the upcoming large-format STX camera series that will not only feature big CCD detectors, but also new revolutionary guiding capabilities. Adirondack showed off its new Fireball Cam that will automatically record and save images of meteors, sprites, and other upper-atmosphere phenomena.

Whether it is professional or amateur Astro-imaging, the downside is the associated cost of decent equipment, be it cameras or telescopes.