AUSTIN — Two bullets of high-energy material seen shooting into space in 2009 may help astronomers understand how black holes create the powerful jets sometimes observed streaming out from their poles. The observations, reported January 10th at the American Astronomical Society’s January meeting, will also appear in the Monthly Notices of the Royal Astronomical Society.

The astronomers combined radio maps from the Very Long Baseline Array with observations from the Rossi X-ray Timing Explorer, a NASA mission that shut down last week, to study an object known as H1743-322.

H1743-322 is thought to be a binary system, containing a small black hole and a regular star from which the black hole siphons material, creating an accretion disk around itself. First discovered in 1977, the system is about 28,000 light-years away (near our galaxy’s center) and appears to eat a big meal from this disk about every 8 months, says Gregory Sivakoff (University of Alberta), who presented his team’s results in a press conference at the AAS.

What’s curious about the dual black hole burp isn’t so much the jet bullets — though those are cool, too — but that their appearance seems to coincide with the disappearance of cyclic X-ray variations called quasi-periodic oscillations, or QPOs. 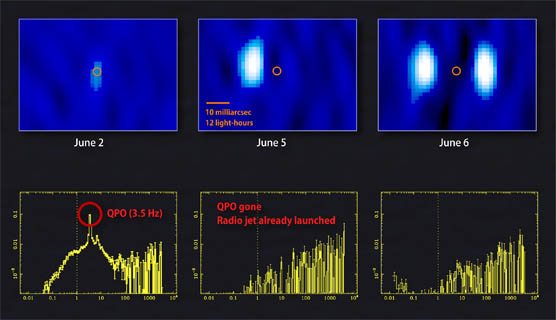 Between observations on June 2nd and when the astronomers looked again on June 5th, H1743-322â€™s cyclic X-ray emissions vanished and a big radio dot appeared to the left of the source, in the direction of the usual, steady jet that comes from the system. Another, similar dot appeared on the 6th on the opposite side. These radio spots are gigantic, superhot blobs, perhaps even knots in the existing jet. Click on the image to see a larger version with additional observations.

Astronomers don’t entirely agree on what causes QPOs. One leading theory is that a blob in the accretion disk produces the signal. As the blob spirals inward toward the black hole the frequency of the X-ray emission would naturally increase — an increase seen in the days leading up to H1743-322’s outburst in early June, even while its radio emissions stayed steady — because the blob is following an increasingly tight orbit. But shearing effects so near to the beast could stretch the blob out, adding complications that aren’t observed.

It’s possible that the QPOs instead arise from warping in the disk itself, caused as the spinning black hole drags spacetime around with it and affects emission seen from the orbiting material. A third idea is that the magnetic field in the accretion disk is to blame, explains Sera Markoff (University of Amsterdam), a theorist on the new paper. Magnetic fields are thought to pervade the disk and are intimately involved in jet launching. It could be that QPOs are actually related to structures in the magnetic field near the black hole, lit up by ionized, superhot gas, she says.

Jets are something like a manifestation of magnetic fields, Markoff explains, since the hot, ionized gas is funneled out of the system along the magnetic field lines. Further study of H1743-322 and other sources should help astronomers understand how jets form, which has been a mystery for decades, she says.

One wonders whether an alternative interpretation might come from the behavior of plasmoids, which are known to periodically decay by ejecting axial jets of charged particles?

Keep in mind the Lerner's work on focus fusion follows on from the Plasma Cosmology model's interpretation of Herbig Haro objects and similar objects with bipolar ejecta as analogies to plasmoids modeled by Peratt & observed in the lab by Winston Bostick.

Just a thought, for what it's worth. Anecdotal, sure. But still of potential interest.

If Earth has a magnetic field, you've got to figure that a black has either one billions of times stronger, or none. I vote for the stronger.