China’s Chang’e 4 mission is continuing its science and exploration work on the farside of the Moon, having completed its eighth lunar day of activities on Wednesday.

China's Chang’e 4 lunar lander and Yutu 2 (Jade Rabbit 2) rover powered down at 9:00 and 9:50 Universal Time (UT), respectively, on August 7th, just under 24 hours ahead of local sunset, according to an update (Chinese) from the China Lunar Exploration Program (CLEP).

The Yutu 2 rover has now covered a total of 271 meters (890 feet) since its deployment and continues to make its way west of the landing site in Von Kármán Crater. Chang'e 4 landed in the 180-km-diameter (112-mile) crater, which lies within the immense South Pole-Aitken impact basin, following local lunar sunrise on January 3rd. NASA’s Lunar Reconnaissance Orbiter has been tracking Chang'e 4's progress as it passes overhead.

Despite passing its design lifetime of three lunar days, or three Earth months, Yutu 2 is apparently continuing to drive well. The rover has even increased its drive distance in recent lunar days, driving 33.13 meters during lunar day 8, the farthest since the 43 meters it covered in lunar day 3. The rover has adapted to and overcome earlier issues that arose when reflections from the craft triggered obstacle alerts.

While traversing the complex lunar terrain, Yutu 2 is also carrying out several science objectives. Progress is slow because, while the rover is solar powered, it actually shuts down for six days in the middle of the 14-day period of sunshine, a precaution against the high, direct solar radiation over the landing site. That leaves just over three days on each side of these "naps" for roving and measurements.

Nevertheless, the rover is returning intriguing results. A mission source told this reporter that the Lunar Penetrating Radar (LPR) experiment aboard the rover has returned "very interesting radar data for lunar subsurface analysis" along the roving route. A paper on the data has been submitted and is awaiting acceptance and publication.

That paper will follow first science results published inMay in the journal Nature, which were based on in situ observations made by the Visible and Near Infrared Spectrometer, another payload aboard Yutu 2. The data indicate the presence of materials that might have originated from below the Moon’s crust. The find is in line with the idea that the impact that created the South Pole-Aitken Basin may have excavated material from the lunar mantle.

Science will also soon be coming from the Queqiao relay satellite, which facilitates communications between Chang'e 4 and Earth from its halo orbit around the Earth-Moon L2 Lagrangian point. The satellite also carries the Netherlands-China Low-Frequency Explorer (NCLE), a pathfinder experiment for low-frequency radio astronomy. The instrument's five 3-meter-long antennae are slowly being deployed in intervals to allow testing and calibration. In the coming months, NCLE will begin observations across a frequency range between 1 and 80 MHz; observations below 30 MHz are only possible in space. 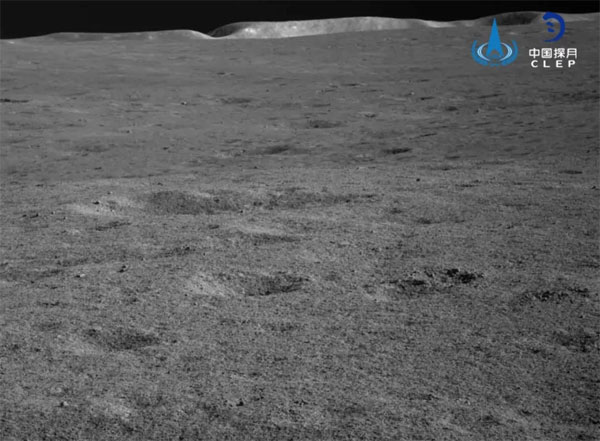 The rim of Von Kármán Crater is visible in this image from Yutu 2.
<em>CLEP / CNSA</em> 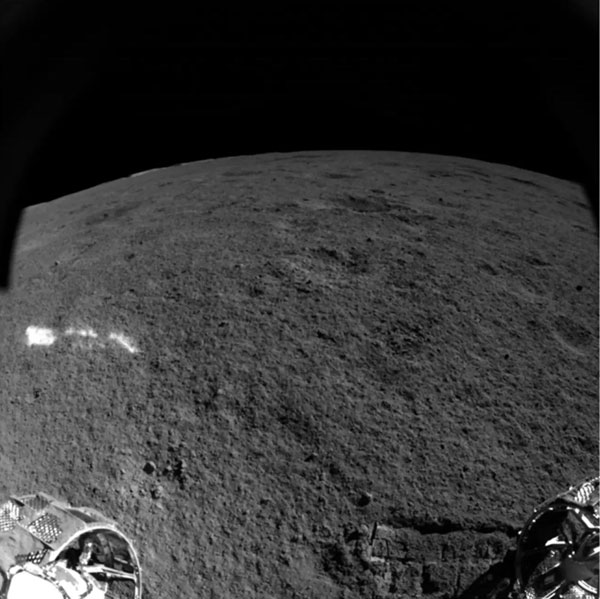 The view through a Yutu 2 obstacle avoidance camera. CLEP / CNSA 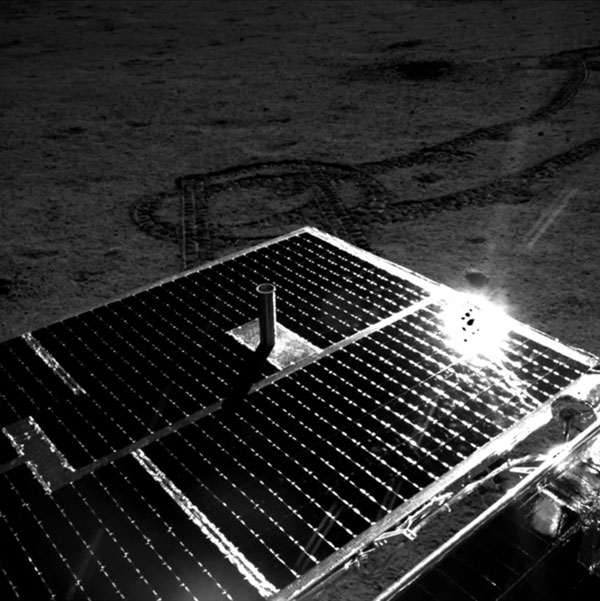 Glare on a solar array of the Yutu 2 rover. CLEP / CNSA 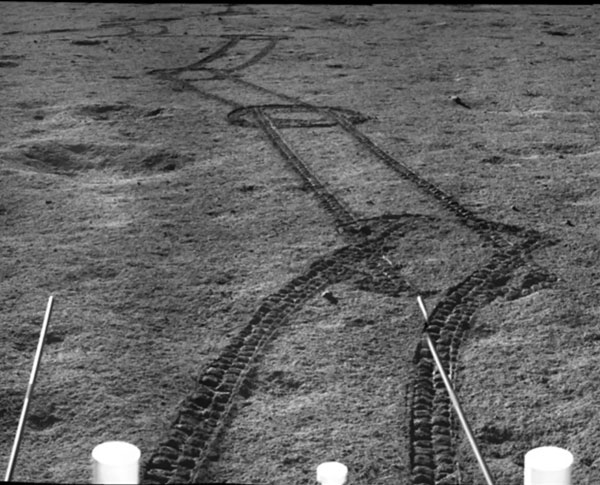 Yutu 2 looking back over tracks made in the lunar regolith. CLEP / CNSA 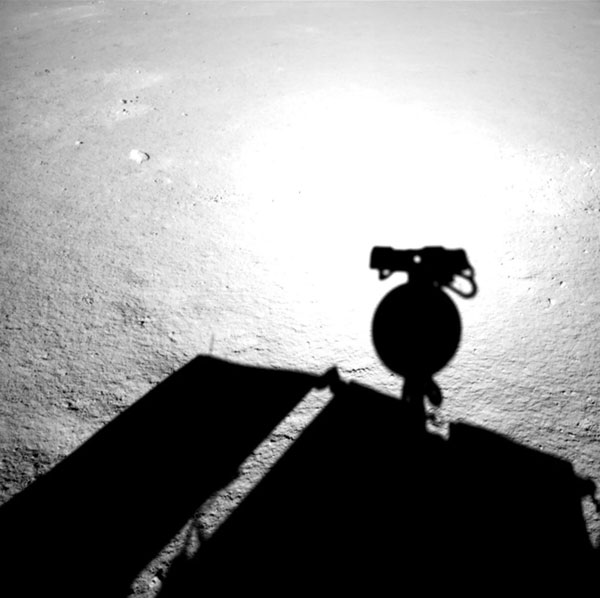 The shadow of Yutu 2 cast in a navigation camera image. CLEP / CNSA 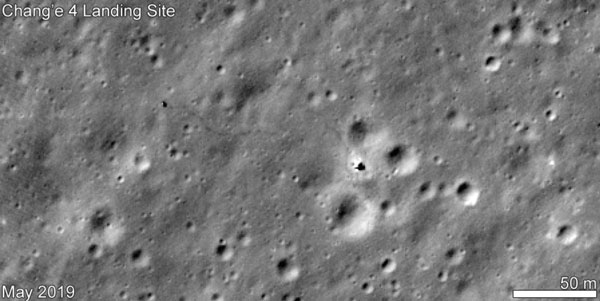 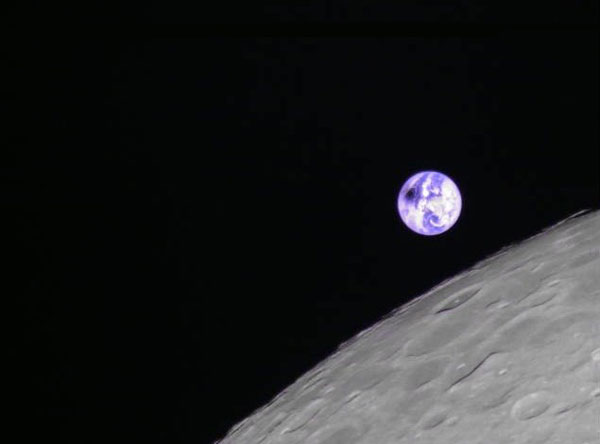 Longjiang 2 was orbiting the Moon when it captured the July 2nd total solar eclipse over the Pacific Ocean. Harbin Institute of Technology

China’s second visit to the farside of the Moon came on July 31st, but it wasn't a soft landing. A tiny, 47-kilogram satellite that launched with Queqiao, Longjiang-2/DSLWP-B, collided at high speed with the Moon. The mission, which lasted over a year, was part technology verification and part pioneering amateur radio and imaging satellite.

Based on earlier mission behavior, Yutu 2 will likely begin lunar day 9 activities on August 24th, around 24 hours after local sunrise. The Chang’e 4 lander will then wake up another 24 hours later.

Can we stop the auto slide show on the images. It is really irritating. I hardly get a chance to view a slide and it goes to the next one I'm having to fight it just view slides at my own pace.

Yes. Clicking on one of the arrows stops the auto-mode...at least on my browser.

Can do! I've stopped the automatic feature, you'll have to click to get to the next slide.