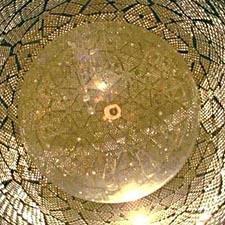 The heart of the Sudbury Neutrino Observatory is an acrylic sphere filled with heavy water and surrounded by photomultiplier tubes. These detect flashes of light produced when neutrinos interact with the water. This fisheye view was taken from beneath the sphere before the bottom panel of detectors was installed.

Neutrinos have mass, they change identity when passing through matter, and the Standard Model of particle physics is wrong. New results from the Sudbury Neutrino Observatory (SNO) in Canada leave no room for other conclusions. The results, announced on April 20th at a joint meeting of the American Physical Society and the American Astronomical Society in
Albuquerque, New Mexico, confirm initial measurements presented last June (Sky & Telescope: September 2001, page 18), but the new findings are even more convincing.

SNO, which has been at work since late 1999, is currently the most advanced neutrino observatory in the world. Located 2 kilometers underground in a nickel mine near Sudbury, Ontario, it consists of a 12-meter-diameter plastic flask filled with 1,000 tons of ultrapure heavy water (D2O), surrounded by a detector array of almost 10,000 light-sensitive photomultiplier tubes. Rare interactions of neutrinos with deuterium (D) nuclei in the tank produce tiny flashes of light, which are registered by the detectors. SNO catches about 10 neutrinos per day.

At least 99 percent of these come from the center of the Sun. Nuclear fusion reactions in the Sun's hot core produce enormous amounts of so-called electron neutrinos, providing scientists on Earth with a unique probe of the solar interior.

Starting in the 1960s, however, astronomers were alarmed when the first neutrino detectors, which were sensitive only to electron neutrinos, found too few of them. Something was clearly wrong with either our knowledge of the Sun's nuclear reactions or our knowledge of neutrinos themselves. Now
SNO has now convincingly shown that the total number of solar neutrinos does beautifully agree with solar theory — but a large fraction of the electron neutrinos apparently change identity while flying from the core of the Sun through its upper layers.

SNO is the first detector that is also sensitive to these other
neutrino types, called muon neutrinos and tau neutrinos. In June 2001, the international SNO collaboration already concluded that neutrinos change flavor, based on its own measurements of two different types of neutrino interactions combined with data from the Japanese Super-Kamiokande
detector. Now, observations of a third type of neutrino interaction in the heavy water — the breaking up of deuterium nuclei into their constituent protons and neutrons by neutrinos — confirm these earlier results.

What's more, the conclusions no longer depend on data from
another detector, and they are statistically much more significant, according to project director Art McDonald (Queen's University, Kingston, Ontario). "The solar neutrino problem has been solved," he says.

However, another problem takes its place. Neutrino oscillations, as these flavor changes are called, are possible only if neutrinos have mass. But according to the successful Standard Model of particle physics, these elusive particles are not only electrically neutral, but also massless. "This result really says the Standard Model can't be right," says John
Wilkerson (University of Washington, Seattle). It's too early to
tell what kind of adaptations to the Standard Model are needed.

But that may change. Already, the SNO results presented at the Albuquerque meeting put much stronger constraints on the mass issue, even though absolute neutrino mass determinations are still impossible. From the experiments, the difference between the masses of the lightest two neutrino types can be deduced. The results of last year allowed two possible outcomes for this mass difference, says McDonald, but the latest results rule out one of them and suggest a mass difference of 0.01 electron volt. According to McDonald, "We're really closing in on the properties of these neutrinos."