When I was a teenager reading crime and mystery books, I was always impressed by the intellectual skills of the detectives, who deduced huge amounts of information from tiny shreds of evidence. But not when they drew extremely speculative conclusions from almost no evidence at all. Learning about the posture of a thief from footprints in the mud makes sense. But a faint smell of rotten eggs at a homicide scene would not be enough to convince me that zombies did it. 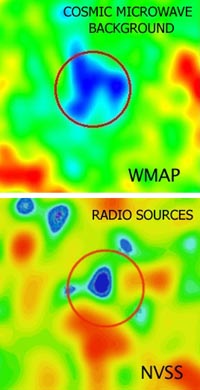 Statistical fluke? Galaxy void? Or a revolution in physics? Maps of southeastern Eridanus show the "cold spot" at microwave and radio wavelengths. The circles are 10° across.

Astronomers, and cosmologists in particular, are very good at drawing big conclusions from extremely subtle measurements. The science of statistics and error analysis is all about knowing exactly how much to trust. But some astronomical conclusions, or speculations, are still harder to believe than others.

Take the cosmic background radiation. At a temperature of 2.7 degrees above absolute zero, this faint microwave signal from all over the sky is quite thoroughly proven at this point to be the much-redshifted remnant glow of the big bang. After subtracting every possible foreground signal (a gargantuan task in itself), cosmologists have mapped patterns of minute, random temperature fluctuations in it of just a ten-thousandth of a degree and less, all across the sky. That's like measuring millimeter-sized bumps in the roof of a seven-story building — tiny shreds of evidence indeed. But so many different experiments, machines, and research groups have found the same thing (often in different overlapping pieces) that among those who are in on it all, doubts have ended.

Cosmology detectives have largely built their current view of the early universe's structure, content, and evolution on these temperature maps, especially the all-sky map produced by NASA's Wilkinson Microwave Anisotropy Probe (WMAP). That seems fair enough, since the WMAP results nicely fit other observational evidence from satellites, balloon-borne experiments, and detectors on the ground — and many known properties of the universe we live in today.

But now, one particular feature in the temperature map is interpreted by Spanish and British scientists as evidence for something more speculative. Marcos Cruz (University of Cantabria, Spain) and his colleagues suggest that the so-called "WMAP cold spot" — a particular, largish temperature low measuring almost 10° across in the constellation Eridanus — is evidence of a topological defect in the structure of spacetime.

In some unified theories of elementary-particle physics, such defects may arise from phase transitions in the early universe. The idea is that they're like the discontinuities in an ice cube that arise when water freezes. One such type of defect, known as a "texture" and first proposed 18 years ago by team member Neil Turok (University of Cambridge, UK), could produce a cold spot like the one observed by WMAP, says the team in today's edition of SciencExpress.

Maybe they're right. In any case, they're careful enough to describe how future gravitational-lensing measurements of the cosmic background radiation may support or refute their idea. But to me, this is a bit like sniffing the air and concluding a zombie did it. Especially since the cold spot can also be explained by a huge void in the distribution of galaxies in the very distant universe. At least, we know for sure that galaxy voids exist. Moreover, the void interpretation appears to be supported by radio observations.

Turok agrees that independent evidence for texture is "not strong." But he is not convinced by the galaxy-void explanation either. "You would need a really huge void, like nothing we've ever seen before," he notes. Moreover, his collaborators have re-analyzed the correlation of the WMAP cold spot with the radio observations, and they conclude that it's not very significant. "Right now," says Turok, "cosmic texture is the most plausible hypothesis to explain the cold spot. But that doesn't necessarily make it very plausible."

So what are we to make of the speculative claim? Well, had I lived in 1930 when Wolfgang Pauli — one of the Sherlock Holmeses of 20th-century physics — predicted the existence of neutrinos on the basis of tiny shreds of experimental evidence, I probably would have been just as suspicious and doubtful. But in 1956 the neutrino was discovered, and Pauli was vindicated. So maybe I'm being a bit too cynical; time will tell. Meanwhile, I can't help thinking of Carl Sagan's mantra: "Extraordinary claims need extraordinary evidence."

Well, now, I'd like to examine the evidence
supporting, "At a temperature of 2.7 degrees above absolute zero, this faint microwave signal from all over the sky is quite thoroughly proven at this point to be the much-redshifted remnant glow of the big bang.", please!