A gigantic neutrino telescope in Antarctica has come up with no evidence for a link between brief bursts of gamma rays and the most energetic cosmic particles hitting Earth. 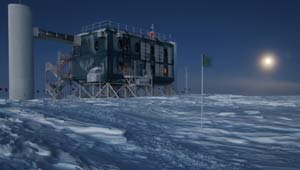 The IceCube Laboratory at Amundsen-Scott South Pole station as dawn was breaking after six months of darkness. The station sits on top of the neutrino detector, which stretches down to 1.5 miles below.

New results out of Antarctica support the idea that the most energetic of the superspeedy space particles raining down on Earth are not from gamma-ray bursts. The conclusion, reported in the April 19 Nature, has upped the ante on a long-standing mystery in astrophysics.

Cosmic rays are relativistic particles (often protons) that appear to come at us from all directions in space. The lower-energy ones — and that’s only by comparison: the low-energy cosmic rays can have energies corresponding to a proton moving at 43% the speed of light — probably come from places within our galaxy, such as clusters of massive, young stars. Astronomers think the highest-energy ones come from outside the Milky Way. In 2007 researchers reported observations from the Pierre Auger Observatory in Argentina that strongly suggested ultra-high-energy cosmic rays (UHECRs) come from active galactic nuclei, distant beacons blazing with the radiation created as supermassive black holes scarf down material. This result has recently been “downgraded,” as astrophysicist Louis Barbier (NASA Goddard) puts it, by the addition of more data: while it still looks like AGN at a certain distance may match the observations, overall the cosmic rays seem more spread across the sky than they would be if coming from the AGN population at large. 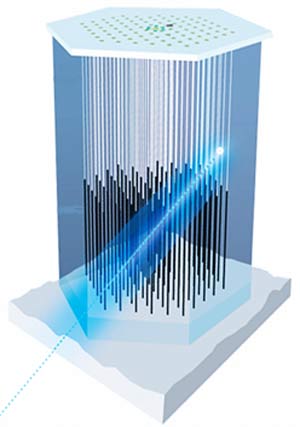 IceCubeâ€™s 5,160 digital optical modules are suspended from 86 strings reaching a mile and a half below the surface at the South Pole. Each sphere contains a photomultiplier tube and electronics to capture the faint flashes of particles speeding through the ice, their direction and energy tracked by multiple detections. The tiny black rectangle on top is the station in the previous image.

The new study didn’t look at AGNs but at gamma-ray bursts. GRBs are flashes of high-energy photons that mark either the death of a very massive star or the collision of two neutron stars. Either event would eject a fireball containing both cosmic rays and gamma-ray photons. A short chain of particle interactions and decays in the fireball produces lightweight, weakly interacting particles called neutrinos, and it’s these neutrinos — not the cosmic rays themselves or the particles they create when hitting Earth's atmosphere — that the IceCube experiment looks for.

Using satellite observations of 300 observed GRBs, the IceCube team looked for neutrinos that could have come from those events. The team expected to see 8.4 events over the course of the two years of observation. But except for two outlier detections that don’t seem to be related to any of the GRBs, no neutrinos were seen.

The team concludes there are two possibilities: either GRBs don’t produce many high-energy cosmic rays, or there’s something unexpected going on physics-wise in the GRB shock — perhaps the production of neutrinos is much less efficient than physicists thought.

There is a caveat: the results assume a particular model of cosmic ray production, and there may be alternative explanations that leave the door open for a GRB-UHECR connection. But overall astrophysicists think the results are trustworthy.

“Members of the IceCube collaboration are among the leading experts in [this] subject,” explains Graciela Gelmini (University of California, Los Angeles). “IceCube is the first detector capable of reaching a conclusion about the possibility that cosmic rays are generated in GRBs,” and now that it has reached the necessary sensitivity these questions can be addressed.

“I do not think the IceCube results are a surprise to anyone — more a confirmation of what was expected,” Barbier says. What’s interesting is that the question of where UHECRs come from is as open as ever. “Galactic winds? Galaxy mergers? No one knows,” he says. “That’s what makes research so much fun.”

We are being probed.

Were blazars included in the potential sources?