Something funny is going on within the few hundred light-years around us, creating high-energy electrons that we don't understand. Recent data from NASA’s Fermi Gamma-ray Space Telescope, launched on 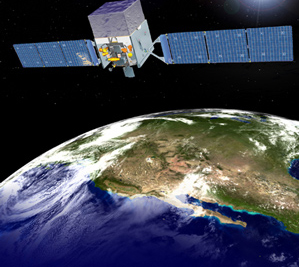 An artist's view of the Fermi Gamma-ray Space Telescope.

June 11, 2008, keep the mystery alive. Researchers still cannot tell whether the mystery electrons come from decays of dark-matter particles or something more mundane, such as a relatively nearby pulsar.

The gravitational evidence is overwhelming that "nonbaryonic" dark matter outweighs all ordinary matter in the universe by about six times. But direct detections of this mysterious stuff have never been confirmed. Dark matter is so elusive because it apparently feels only gravity — it neither emits or absorbs light, and thus remains invisible. Nor does it clump together like ordinary matter to form condensed objects like stars and planets. But its gravitational pull is necessary for galaxies to form and hold together. 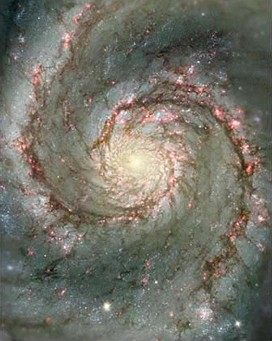 The extra pull due to dark matter's gravity is necessary to explain the rotation speed of the outer arms of galaxies, such as M51, the Whirlpool Galaxy.

A popular theory assumes that dark matter consists of one or more undiscovered massive particles predicted by "supersymmetric" theories of physics. Such particles might annihilate when they collide or might disintegrate spontaneously, creating high-speed electrons and positrons in the process.

In recent months, scientists with the international ATIC balloon experiment and the European PAMELA satellite reported excesses of high-speed electrons and positrons (their antimatter counterparts) coming from deep space (Sky & Telescope, April issue cover story). Comparing the recent Fermi data with the PAMELA results, Elliott Bloom (SLAC National Accelerator Laboratory) of the Fermi science team says, “If you take both of these together, the implication is that there seems to be a relatively close-by source” to generate the extra high-speed electrons and positrons. 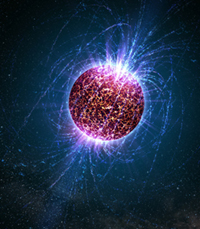 Even if the excesses of particles are confirmed, they may very well be due to astrophysical sources — such as the pulsar in this artist's view — rather than dark matter.

They can't come from more than a few hundred light-years away because collisions with interstellar gas would slow them down. Yet a nearby source does not necessarily imply dark matter. For example, the pulsar Geminga, about 500 light-years away in Gemini, could be emitting the electrons and positrons.

While they fit with the PAMELA experiments, the Fermi results seem to contradict those of ATIC. Fermi detected far fewer extra electrons and positrons than ATIC did. ATIC sparked a flurry of excitement last fall because it had observed many electrons with, more or less, the high energies expected from decays of the most widely hypothesized dark-matter particle.

The ATIC team is left to reanalyze its data and figure out what happened. ATIC team leader John Wefel (Louisiana State University) acknowledges that 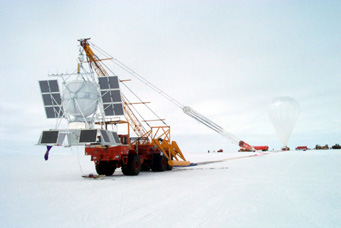 The ATIC experiment, left, hangs while its balloon, on the right and in the distance, is about to be released.

Fermi’s data is more trustworthy because it includes so many more electrons: “Statistics is where they win big time,” he says.

The Fermi collaboration’s scientific paper says no dark matter is needed to explain its data, but it does not close the whole case. Bruce Winstein (University of Chicago), who did not participate in the experiment, says: “They’re being unusually conservative.”

The Fermi data does fit well with that of the other experiments, including PAMELA. And that data seems to point to something like dark matter or pulsars. “Our data suggests that there is a feature,” says Peter Michelson (SLAC National Accelerator Laboratory), lead scientist for Fermi’s primary science instrument, the Large Area Telescope. 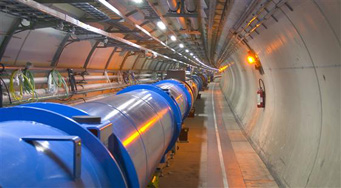 The LHC tunnel and particle-accelerator tube near Geneva, Switzerland.

But if even if there's just a single source at one point in the sky, it won't be easy to determine. Most of the electrons are scattered or deflected by galactic magnetic fields before they reach Earth, making it hard to tell where they originated.

As early as this October, the Large Hadron Collider near Geneva, Switzerland, could provide the much-awaited breakthrough by creating dark-matter right here on Earth. Scientists could then learn about the properties of these particles — starting with their masses, for instance — and see whether they can produce the effects hinted at by Fermi and PAMELA.

If the results of the ATIC teem again says the direction of the electrons travel is random what does this mean for the the
Dark Matter guys? Maybe its time to abandon Dark Matter and get back to the study of local gravity. MOND seams to make more sense with observation every day. Get back down to earth, study and understand the spacial dynamics of gravitational space locally. If we learn to manipulate gravity space-time [anti-gravity, warping space, propulsion systems, etc] locally then we may no longer need fantasy solutions to observed phenomenon's or anomaly's. The answers will reveal them selves if we look harder at the wall! Robert