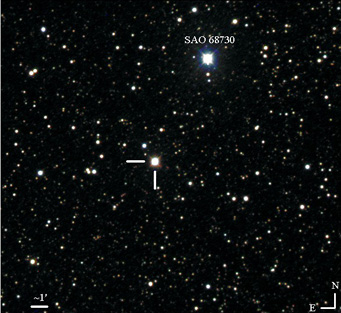 By remotely controlling a 10-inch (0.25-m) f/3.4 reflector in New Mexico, Ernesto Guido and Giovanni Sostero (in Italy) captured one of the confirming images of the nova. About 6 arcminutes northwest of the nova is a 5.9-magnitude star, the brightest star in this field.

A 7th-magnitude nova was discovered on April 10, 2008, by Koichi Nishiyama and Fujio Kabashima in Japan. The new star lies in Cygnus, about one-third of the way from Albireo (β Cygni) to Sadr (γ Cygni). From early indications, it may still be brightening.

The find was announced today on IAU Circular 8934, issued by the
Central Bureau for Astronomical Telegrams at the Smithsonian Astrophysical Observatory in Cambridge, Massachusetts. The circular reports that Nishiyama and Kabashima spotted the nova on patrol images taken with a 105-mm camera lens at a point where, three days earlier, no star had appeared. The coordinates of the nova are right ascension 19h 43.0m, declination +32° 19' (equinox 2000.0).

Ernesto Guido and Giovanni Sostero of Remanzacco, Italy, were among the very first observers to confirm the discovery before the IAU Circular came out. They used a 10-inch reflector operated by Global Rent-A-Scope near Mayhill, New Mexico (see the image above). They put the nova's V magnitude at 7.54 near 9 hours Universal Time on April 11th.

The American Association of Variable Star Observers (AAVSO), collects magnitude determinations by skilled observers to aid in the study of novae and other variable stars. Visit their site for further information, including finder charts and guidance on the techniques involved.

If you received this AstroAlert by e-mail, be sure to check the online version here for possible late corrections or updates.