Question Reopened: How do Galaxies Grow?

Evidence from observations sheds doubt on cosmic cannibalism as a source for galaxy growth, suggesting that instead galaxies grow by pulling in gas from the intergalactic medium.

A quick stroll through Hubble’s archive shows a surplus of massive spiral galaxies — a tapestry of the drama of stellar birth and death across thousands of light-years. But one question remains: how do these galaxies continue forming stars at such a fast clip?

Galaxies should quickly deplete their reservoirs of gas as they create new stars and so must somehow continuously replenish those reservoirs with fresh gas to keep the star formation going.

Last year, a series of studies showed that galaxies power most of their star formation — and therefore their growth — through merging with dwarf companions. The Milky Way is a prime example, as it shows no signs of a major merger, but continuously munches on nearby dwarf galaxies.

But a new study shows this might not be the case.

Enrico Di Teodoro (University of Bologna, Italy) and his colleagues set out to better understand this process by observing 148 spiral galaxies and any companion dwarfs they may soon accrete.

So the team focused on the 32 galaxies with dwarf companions, finding that any future mergers would only provide the massive spiral galaxy with 0.28 solar masses per year of gas — approximately a fifth of the gas necessary to continue forming stars (1.29 solar masses per year).

In other words, the number of dwarf galaxies is simply too low to supply enough gas to each massive galaxy.

A reader in the know might recall the missing satellites problem — the discrepancy between the number of small, faint galaxies predicted to exist in numerical simulations and the number actually seen. Are there extremely faint galaxies that Di Teodoro and his colleagues couldn’t see, potentially biasing their result?

“The missing satellites problem arises from numerical simulations that likely are not yet able to reproduce the whole physics,” says Di Teodoro. “Very deep observations in the Local Group show no evidence of a significant population of very low-mass dwarf galaxies as predicted by simulations. Personally, I believe that the lack is in the current simulations rather than in the observations.”

So the team has reopened the question: how do these galaxies grow?

“The question of how spiral galaxies can continue to form stars at a nearly steady state is still open, and the picture seems to be much more complicated than people used to think a few years ago,” says Di Teodoro.

One option is that galaxies grow by pulling in gas from the intergalactic medium — the hot plasma found between galaxies. But only cold gas is the fuel for star formation. At low temperatures, atoms within the gas are able to bind together and also clump to high densities. So in order for this scenario to work, the gas would need to cool down, a process that has proved difficult to observe directly, says Di Teodoro.

“At the present, gas accretion from satellites does not provide a major contribution to the star formation rate of spirals,” affirms Lambas. He does, however, caution that minor mergers will not have a negligible effect: star formation is a natural consequence of a tidal interaction. As the massive spiral galaxy engulfs the dwarf galaxy, any gas within will feel a headwind, much as a runner feels a wind even on the stillest day, and become compressed enough to spark star formation.

It’s possible that the impact of the dwarf galaxy mixing up the gas in the spiral is larger than the impact from gas injected into the spiral, says Kaviraj. The issue will have to be explored further before astronomers can determine the true culprit behind continued star formation in massive spiral galaxies.

Star formation is closely linked with dust. When a fast-moving (hot) proton hits a sluggish (cold) dust particle, the transfer of energy is quite efficient. It is like a ping-pong ball hitting a curtain: it doesn’t stick, but it loses most of its energy. The proton no longer has escape velocity, and becomes “localized.” The dust-particle then leisurely radiates away the excess energy. Dust clouds in a galaxy are effectively radiators, with very large surface areas, making them excellent cold-traps. The idea that spiral galaxies grow by pulling in gas from the intergalactic medium is highly plausible.

Your point is logical and well explained Peter. As to the question under discussion here - How do galaxies grow - as well as a general working principle, isn’t it wiser to put more trust in what actual observations show as opposed to what theoretical simulations predict? Dwarf satellite galaxies aren’t really missing, they are ether there or they are not there. They are only “missing” if one is trying to argue in favor of galactic mergers as the only or the major method of galactic growth. Reality seems to be telling us something different; that galaxies normally grow at a statelier, generally uniform pace. I would think that slow but relatively steady star system formation supported by a more or less continuous in-fall of extra galactic gas as a mode of galactic growth would produce a universe that is more clement for the production of long lived potentially life bearing worlds. Yes, galactic mergers do occur of course, but even they aren’t the violent affairs that the word “collision” implies. But even so, fewer mergers would make the Universe less hostile to life, would it not? The universe contains regions that are too extreme for life, but not too many of them for planets like Earth to exist for extremely long periods.

My take on this finding is that it is yet another piece of the puzzle telling us that this Universe was designed to contain life.

On the one hand, even with all the evident “fine tuning,” perhaps only one-in-a-million stars will have habitable planets orbiting them. The Designer seems a little wasteful. On the other hand, only a small percent of the available hydrogen fuel has been used, and the universe in no immediate danger of collapsing back in on itself. It appears Built to Last.

I'm leaning toward a larger magnetic picture from a gyro source out there that's also tossing comets that look like lambs at us also....astroblender per se....and when this giant spinning ball gets lucky enough to hit a planet with a big enough chunk of ice, water coats it?? Space is tricky with magnetism, are we just smaller pieces of a huge magnet all balancing out our big bang flux energy??

Galaxies growing inside, from the core what you think. 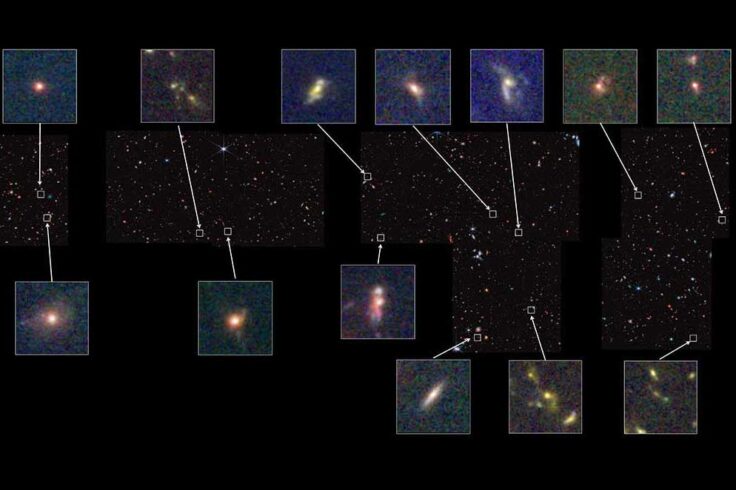 The James Webb Space Telescope Is Finding Too Many Early Galaxies 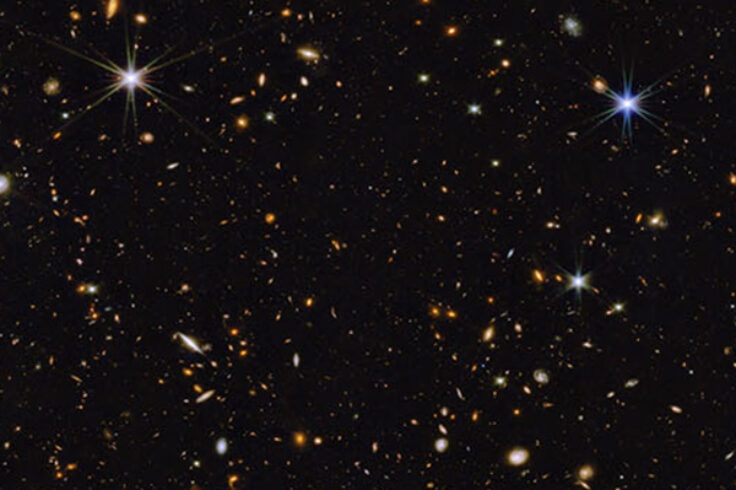 Webb Telescope Sees Deep and Wide into the Universe 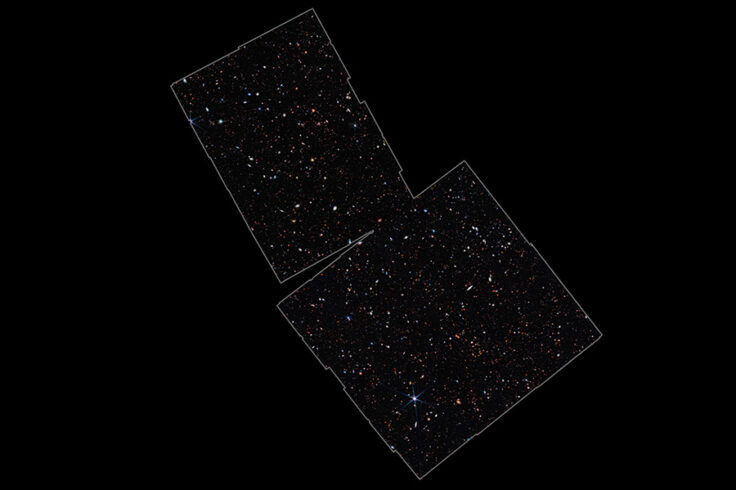 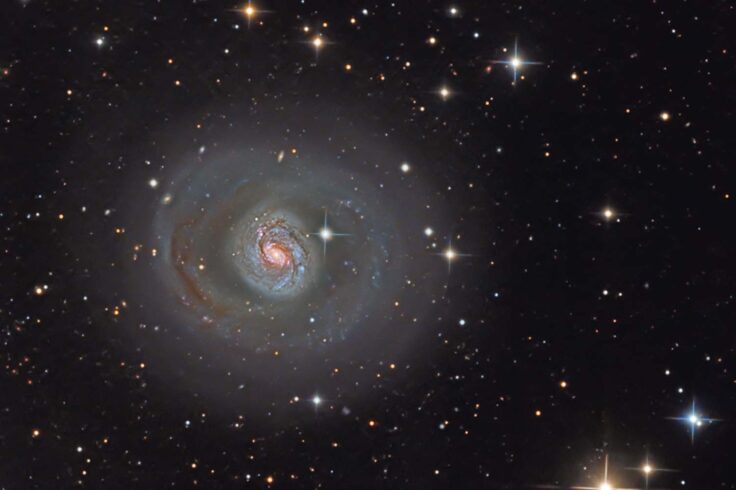 Squid Galaxy Gets in on the Neutrino Game 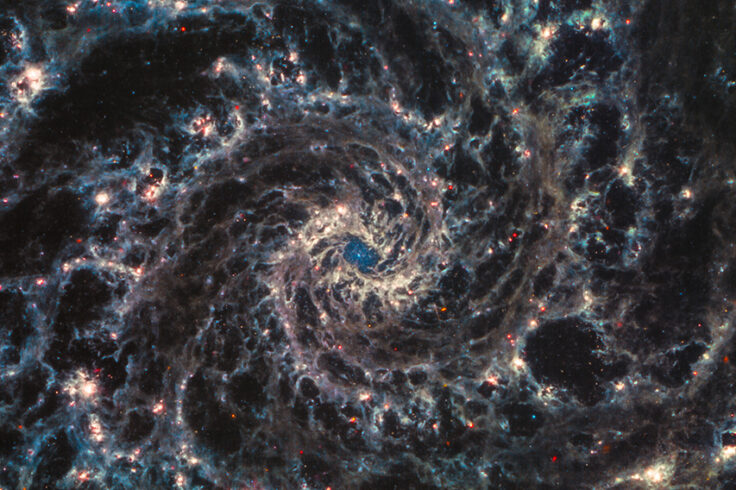