Homing in on Dark Matter

Three potential detections from deep underground could be from dark matter particles. 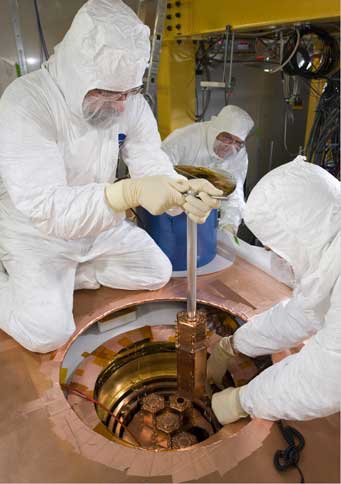 CDMS scientists remove one tower of detectors used in the Cryogenic Dark Matter Search experiment. Data from a 2003-2008 CDMS run, called CDMS II, contain three signals that might be from dark matter particles hitting atoms in the experiment's detectors.

Not to be outdone by the noncommittal announcement two weeks ago of a possible dark matter signal in space, an international team working deep in a Minnesotan mine has announced their own potential detection. This time, the detection — if that’s what it is — is a direct one: three events that might be from dark matter particles scattering off atoms in silicon wafers used by the Cryogenic Dark Matter Search (CDMS) collaboration.

These three events do not constitute a discovery: with a statistical significance of three sigma (science jargon for “pretty good but no cigar”), the detections could still be just background noise.

Still, the result intrigues dark matter researchers. “This result looks about as solid as three events could — but then again it’s only three events,” says Dan Hooper (Fermilab), who was not involved with the experiment. “It’s an interesting hint, made even more interesting because of the similar signals seen in other experiments.”

Those similar signals imply, as the CDMS-II result does, a particle mass of about 10 gigaelectron volts. (If you could convert an electron’s entire mass into energy, it would take roughly 2,000 electrons to make a GeV.) That would make it a lightweight weakly interacting massive particle (WIMP), the current favorite for the universe’s primary-yet-invisible matter constituent. Notably, that mass is only about one-hundredth of what’s implied by the AMS results announced earlier this month, says Hooper.

The CDMS experiment is lodged about a half mile underground in the Soudan Underground Laboratory. Its second-generation run, CDMS II, ran from 2003 to 2008 and used cryogenically cooled silicon and germanium wafers, stacked into little towers, to look for passing dark matter particles. If dark matter particles are whizzing by, every once in a while they should collide with an atom in the detectors, making the nucleus recoil and give off heat. Because silicon atoms are less massive than germanium, they react more when lower-mass particles hit them than germanium atoms do. Eight of the experiment’s 11 silicon detectors were analyzed in the new study by Rob Agnese (University of Florida) and his colleagues, which will appear in Physical Review Letters. 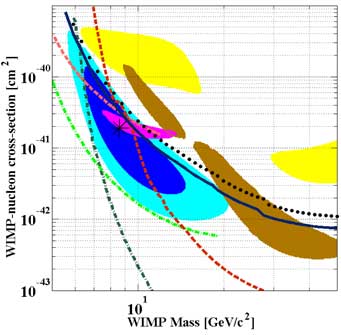 Upper limits and signal ranges (>90% confidence level) for two WIMP parameters from various experiments. The new CDMS-II result is the dotted black line; the blue line is the new work combined with previous CDMS-II data. Red lines are from CDMS II germanium work, green from XENON, filled magenta from COGENT, filled yellow from DAMA / LIBRA, and filled brown from CRESST. The asterisk is the new study's best estimate of the WIMP mass, 8.6 GeV.

As demonstrated in the graph at right (taken from the team’s paper), many experiments seem to be homing in on the mass suggested by CDMS II. One that's not is the Italian XENON experiment, which points to a lower WIMP mass. That might be because dark matter interacts differently with protons and neutrons or because the experiment’s threshold is higher than expected (to name a couple of possible explanations).

The mass also agrees with one suggested by a faint gamma-ray haze teased out by Hooper and his colleagues from observations by the Fermi Gamma-ray Space Telescope. The haze — different than the gargantuan bubbles also seen ballooning from that region — would be a byproduct of dark matter particles colliding and annihilating. There’s a remarkable agreement between the Fermi residue and what’s expected for dark matter, but the signal could also be from millisecond pulsars, says Kevork Abazajian (University of California, Irvine).

So what will it take to “discover” dark matter? Gamma-ray detections from dwarf galaxies (which have a lot of dark matter and probably not a lot of millisecond pulsars) would help. So might future results from CDMS’s next iteration or other ground-based experiments, such as LUX in South Dakota.

Sigh! We have been through this scenario many, many times before and the final outcome has always been the same: false positives.

It never ceases to amaze me that theoretical physicists are fixated on theories (strings, SUSY, WIMPS, anthropic illogic, multiverse fantasies) that cannot make and/or pass definitive scientific predictions, and yet they will totally ignore a unified paradigm that has made true predictions and passed a number of them:
http://www.academia.edu/2917630/Predictions_of_Discrete_Scale_Relativity .

Perhaps this situation will reverse when the new paradigm’s exact predictions for the galactic dark matter gain further empirical support. See: “The case for primordial black holes as dark matter” by MRS Hawkins, available at http://arxiv.org/abs/1106.3875 .

Without even going into alternative theories (see Robert's post), I ask myself how on earth it could ever be possible to collect "enough" (what ever THAT number's going to be!) alleged dark matter events (in one place and time?) to be able to reach confirmation level approaching something like "safe" knowledge? Can we ever get there at this pace of recording 3 events here, 5 events there a few months later, etc., etc.? Can we ever get near the 5 (?) sigmas we'd require?

http://vixra.org/pdf/1303.0207v1.pdf
What is Dark Matter?
This 4 page conceptual vixra article conjectures that, more energetic than the cosmic gamma photons, there should exist dark photons and Planck photons. Dark photons may be the particles of the elusive dark matter.

http://vixra.org/pdf/1303.0207v1.pdf
What is Dark Matter?
This 4 page conceptual vixra article conjectures that, more energetic than the cosmic gamma photons, there should exist dark photons and Planck photons. Dark photons may be the particles of the elusive dark matter.

(If you could convert an electron’s entire mass into energy, it would take roughly 2,000 electrons to make a GeV.) So the mass being detected is around 10 protons?