Imaging Tools and Techniques at MWAIC 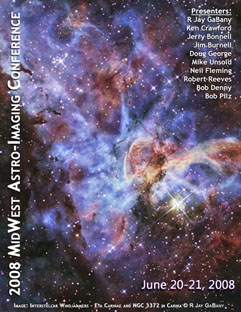 Whether you just took your first picture of the night sky or have years of experience, there was something for everyone in Hoffman Estates, Illinois, during the MidWest Astro-Imaging Conference June 20-21.

Sponsored by Al Degutis of AstroPhoto Insight Magazine, the event offered a broad selection of presenters specializing in everything visible in the sky from the Moon to the faintest reaches of space. 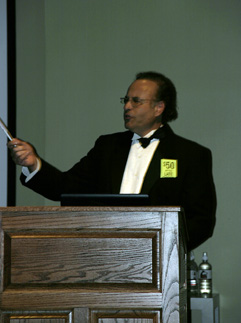 A great gem numerous imagers mentioned with frequency was a plug-in filter for Adobe Photoshop called Focus Magic. Designed for forensic applications, This filter performs a type of deconvolution useful for any type of image, and works quite well.

Speaking of Photoshop, representatives of software and cameras were on hand to demonstrate the latest in digital technology. Adobe, Canon and other imaging-product vendors including Diffraction Limited, DC-3 Dreams, MLUnsold Digital Imaging were represented in the vendor area. Both Quantum Scientific Imaging and Fishcamp Engineering showed off their versatile cameras.

Workshop sessions were held in smaller classrooms, allowing those interested to experiment and follow along with various software packages such as ACP, AIP4WIN, MaxIm DL, and ImagesPlus.

Had the pleasure of attending this conference and it was very good. It's really wonderful that I had a good session to attend at each slot that fit what I was looking for to improve my imaging or processing skills. I found the Photoshop information excellent and learned techniques that will really improve my images. I highly recommend going to this conference next year. Check out Sky Insight Magazine for more information on this conference as it becomes available. Some of the conferences content will not for free but you will find it valauable.

Photoshop is a great tool for addressing issues of focus or blur. It's internal deconvolution filters work great. For the money, Focus Magic is pretty good as well. You can also try Ocean Systems' ClearID version 2 or Reindeer Graphics Optipix filters.

Feel free to check out the Smart Sharpen tutorials on my blog. They're FREE.

I attended MWAIC for the first time with the hopes of picking up a few imaging tips. I was very pleased to attend one five star presentation after another. Any one of them would have made the conference worth while. I’m glad that the Power Point notes and recordings of the sessions will be available to attendees because I have to admit that I was saturated by noon the first day. I can highly recommend this conference and can’t wait till next year. My thanks to all the presenters and conference staff.

It was a pleasure to attend this great conference.

Just having the opportunity to meet and interact with imaging legends was fantastic. The presenters did a great job and the atmosphere was professional and friendly. I'll definitely attend next year!

It was a great experience to make new friends, meet presenters, participants and vendors!