NASA’s Kepler space telescope is the world’s most successful planet hunter and is often called one of NASA’s greatest successes ever — despite the sudden end to its main mission last May. For nearly 4 years, Kepler continuously monitored 150,000 stars searching for tiny dips in their light when the silhouettes of planets crossed in front of them. Among Kepler’s finds are some of the most extreme and uncanny worlds yet known. It has caught planets that nearly scrape their host star’s surface, others that orbit a pair of suns, and multi-planet systems that are crammed into a space smaller than the orbit of Mercury.

Yesterday the Kepler science team broke another record by adding 715 newly confirmed exoplanets to its tally. “We have almost doubled, just today, the number of planets known to humanity,” said Jack Lissauer (NASA’s Ames Research Center) in a teleconference announcing the news.

These newly verified worlds are all in multi-planet systems — dubbed “multis” — which is how they were confirmed. Most are relatively small; 95% rank as Neptunes, mini-Neptunes, super-Earths, and almost-Earths. Tantalizingly, even Kepler has a hard time detecting objects smaller than that. The new finds mark a big boost for the conclusion that small planets far outnumber giant planets, a trend that presumably holds true throughout the universe.

In a sense, however, none of the planets are new. They were all on Kepler’s list of about 3,500 “planet candidates:” periodic transit-like signatures that likely indicate real worlds but may still be false alarms. In its nearly 4 years of operation Kepler recorded 30,000 seeming transits. But without additional evidence, these apparent planetary transits could only be claimed as planet “candidates.”

The issue is this: there are other ways stars can produce the same slight clockwork dimmings. Binary star systems often eclipse each other. And sometimes, a normal eclipsing binary appears blended with the light of a brighter third star nearby. The result can look remarkably similar to the dimming created by a planet. In the past, confirmed planets trickled in slowly as verification usually required large ground-based telescopes to make slow, painstaking radial-velocity measurements of the star, in search for its signature gravitational wobble.

But the change came when the Kepler team verified that it could rely on a different kind of analysis. This has suddenly delivered more than 20 times as many planets as have ever previously been announced at once.

The key to this new technique, known as verification by multiplicity, is that systems in which 2 or more planet candidates transit a star are very unlikely to contain false positives. If more than 1 star were eclipsing Kepler’s main target, orbital analysis shows the system would be in complete chaos and would have flung itself apart ages ago. In nearly all cases, these systems are simply too unstable to exist. Even if only 1 star were eclipsing Kepler’s main target the system may be unstable.

But if more than 1 planet were eclipsing Kepler’s main target, orbital analysis shows the system would be ordered and well-behaved. We know from our own Solar System that multi-planet systems can be incredibly stable.

For a multi-body (3 or more) system to remain stable there needs to be a large central mass (i.e. either 1 star or 2 closely bound binary stars) with all other masses relatively small. See animation. So the team is now confident that any Kepler-monitored star with multiple planet signatures is the real thing at about the 99% confidence level.

Not only did this free up a flood of “confirmed” exoplanets, it made it much easier to classify smaller planets as confirmed. The total number of known Earth-sized planets increased by 400%, super-Earths by 600%, and Neptunes by 200%

Excitingly, 4 of the new planets are less than 2.5 times the diameter of Earth and orbit in their star’s habitable zones. If 4 sounds like a depressingly skimpy number compared to 715, that’s because Kepler mainly finds broiling furnace worlds close to their suns. These simply have the greatest chance of causing transits from Earth’s arbitrary viewpoint. Similarly large numbers likely orbit in the more clement zones a little farther out.

“Kepler has been able to showcase the diversity of planets present in our galaxy,” said Sara Seager (Massachusetts Institute of Technology). It has reinforced the finding that planetary systems come in a huge variety, some drastically different from our own, and even called into question our understanding of multi-planet systems.

Nature has proven able to cram a surprising number of planets near each other in orbits smaller than Venus’s or even Mercury’s. The record-holder in the newly announced tally is Kepler 90: a Sun-like star with at least 7 transiting planets all circling the star within the Earth's orbit.

It’s likely that planet migration played a role in the early history of these systems, or that protoplanetary disks denser than our solar system’s initial disk are more common than previously thought. Massive disks not only might spawn more globes, they should also make planet migration easier, since heavy disks will gravitationally interact with planets more strongly.

The 715 new confirmations were pulled only from Kepler’s first 2 years of data. The next step will be to sift through the mission’s entire database. Due to the longer time frame, the team expects to find hundreds more small worlds including a greater proportion in their systems’ habitable zones. It naturally takes longer to catch at least 3 transits of Earth-like planets that circle their host stars once a year, compared to those that whip around their stars in just a few days.

The article on the subject says that the data from Kepler doubled the number of confirmed planets since 1992. Kepler wasn't launched until the early 2000s and I don't any planets had been discovered that early in the search. Clarify please.

I take the point about the probability of spotting an earth-like planet (orbiting a sun-like star at c. 1 AU) is less than 0.5%. But this is only true if stellar alignments are effectively random. Is there any evidence for local ecliptics tending to be aligned (presumably with the galactic axis)? This is roughly the case for the solar system, where the galactic core lies on the ecliptic (in Sagittarius).

Chris, no, the planes of solar systems seem to be randomly aligned. The planets in our solar system, for example, orbit the Sun in a plane that is tilted about 60 degrees relative to the plane of the Milky Way Galaxy. That's why the visible milky way crosses the ecliptic in Taurus/Gemini and Scorpius/Sagittarius, and appears far to the north of the ecliptic in Cepheus/Cassiopeia and far south of the ecliptic in Centaurus/Crux. Remember that newborn stars are most strongly gravitationally bound to the center of mass of their natal star cluster, not to the center of mass of the galaxy, and that as they age most stars are ejected from their birth cluster. While they continue orbiting the center of the galaxy, their rotational orientations are random, and thus probably not parallel to the plane of their orbits around the center of the galaxy.

By the way, this is an excellent report. I saw the reports of this finding in the mainstream media a couple of days ago, and was underwhelmed: oh boy, more exoplanets, and a handful of possible goldilocks. This report captures both the methodological innovation and practical importance of these new findings. Thanks.

I'm not REALLY finding all this very NEW, or exciting. When I was a kid growing up I was taught back in the 60's that there would be other planets in the universe waiting to be discovered. I learned this in confirmation class at my church, and in public school. God created EVERYTHING, and that includes the sciences and the people who use it. I think God would (and is) finding it a regular COMEDY act watching us fly of the deep end, and getting all worked up about something it took him not much effort at all to create. ENJOY!

50 years ago I was a math major. But. Never took statistics. Can any of you estimate the number of star systems with planets but without transitional planets from our perspective. Please include the assumptions. (Bet it is a bunch.) Thanks.

Are we close to find an Earth like planet?
I think bigger planets will be more visible then smaller planets, and probably the bigger planets hinder the smaller ones. If for example we take picture of our own solar system from outer space, we will be able to see, Jupiter, Saturn and Neptune but Planets like Mrs, Earth and Vinous probably will not be visible, unless special instrument are fixed to ignore the big planets and focus on the smaller ones. Although to find bigger planets is blessing for their indication of the existence of another solar system then ours and which looks that there are too many probably round every star we see in the universe. It is not necessary that every exo-planet even placed in the habitable zone MUST contain life like earth, only if it operates under similar conditions. Unless there might be, different conditions for life we still don't know and which may take us into surprise. But the possibilities of earth like planets running under the similar conditions is also possible, since the earth itself along with our solar system are of a universal creation made of similar gases in the cosmos. How ever this news is great. It is another step forward to enhance our knowledge and to look at the future. 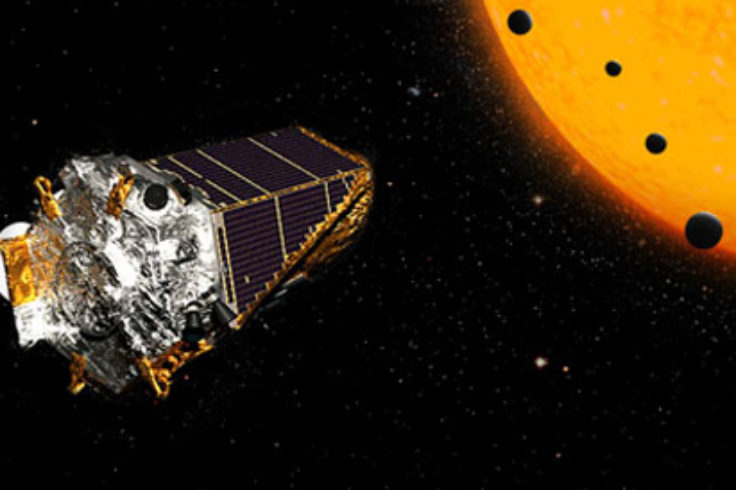