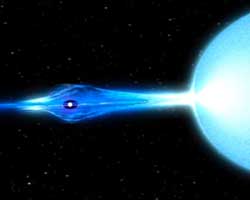 This artist's illustration depicts gas as it falls from a relatively normal star (right) down to the surface of a tiny, fast-spinning neutron star.

About 150 low-mass X-ray binaries (LMXBs) are known. In all cases, the X-rays are due to gas from the companion star falling toward the neutron star. Some systems also show brief bursts of X-rays, produced by thermonuclear fusion of piled-up hydrogen and helium on the neutron star's surface.

Millisecond pulsars (MSPs), on the other hand, do not emit X-rays, but are instead detected as very rapid radio pulsars, spinning hundreds of times per second. A low-mass companion orbits some MSPs, but others are alone in space. Apparently, mass transfer in these systems has ceased, maybe because in some cases the companion stars have completely been "eaten away." To firmly establish this evolutionary link between LMXBs and MSPs, though, astronomers would need to prove that the accreting, X-ray emitting systems have also high spin rates.

Suggestive evidence came a few years ago when astronomers discovered an X-ray source, known as SAX J1808.4–3658, which served as the missing link between the two populations. During its active period, it showed rapid brightness fluctuations, presumably due to the fast rotation of the accreting neutron star. However, the source was faint and short-lived, so follow-up observations were hard to get, says Craig Markwardt (NASA/Goddard Space Flight Center).

But at this week's joint meeting of the American Physical Society and the American Astronomical Society in Albuquerque, New Mexico, Markwardt announced the discovery of a second accreting millisecond pulsar, XTE J1751-305. During the entire 10 days when it emitted X-rays, its brightness fluctuated every 2.3 milliseconds — surely its rotation period. From the observed Doppler shift, Markwardt also deduced an orbital period of just 42 minutes and a companion mass of only 15 Jupiter masses (0.014 of the Sun's mass) suggesting that the companion (probably a helium white dwarf) has already been mostly consumed by the neutron star. The complete system would easily fit inside our Sun, Markwardt says.