NASA's next orbiter has successfully launched and is en route for the Red Planet. 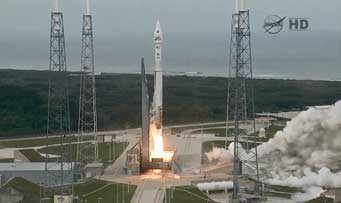 The Mars Atmosphere and Volatile Evolution Mission (MAVEN) is a funny-looking time machine: its two slightly curved, solar-panel-paved wings stretch to either side of a tinsel-covered box that wears what looks like a lampshade. (It’s the high-gain antenna.) Wingtip to wingtip, it spans 12 meters (37 feet) — the same length as a school bus.

But designed to explore the Red Planet’s current atmosphere and discover what happened to its ancient (potentially habitable) one, the MAVEN orbiter is definitely a time machine.

Astronomers know that ancient Mars looked totally different than today’s Mars. The oldest craters have had their edges worn down by precipitation, and gully and delta features suggest liquid water once flowed, albeit perhaps intermittently. Liquid surface water would require a much higher atmospheric pressure than the current one, which is roughly 1% of what exists at sea level on Earth. That’s equivalent to the air pressure in Earth’s stratosphere.

Other observations also indicate that Mars’s atmosphere has mostly disappeared. Chemical elements can exist as different isotopes, distinguished by the number of neutrons in their nuclei. One example is hydrogen and its heavier (and much less common) form, deuterium. An element’s isotopes usually exist in specific ratios with respect to one another, so when the ratio of two isotopes in a sample unnaturally favors the less common one, scientists can use the ratio to estimate how much of the more common one must have been lost in order to produce the levels they detect. 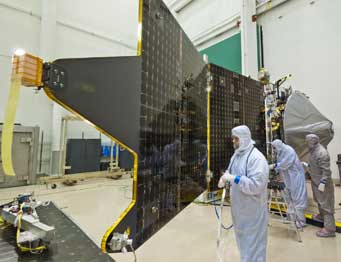 Isotopic studies of Mars’s atmosphere for several elements, including hydrogen, argon, and carbon, suggest that the planet has lost between 25% and 90% of its atmosphere (with the data leaning toward the higher end of that range).

There are two places an atmosphere can go: up or down. But as far as down goes, there’s just not enough storage space. Mars does have vast water ice deposits beneath its surface, and its surface has rusted from oxidation. But there’s nowhere for all the carbon dioxide to hide — no widespread limestone deposits as on Earth, which probably outgassed as much carbon dioxide as Venus did but trapped much of it in sediment deposits.

That leaves up. Gas can escape if it’s warm enough (i.e. the molecules are moving fast enough), or if it’s stripped off by the blustery, magnetic-field-infused solar wind.

MAVEN is flying to Mars to find out how these processes work today. It’ll be the first mission to directly sample the planet’s upper atmosphere from orbit. From its data, scientists will then extrapolate backwards to (hopefully) find out what happened in the past. 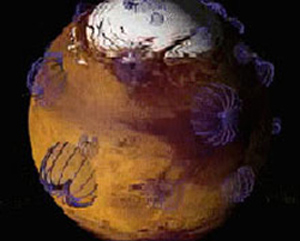 Mars no longer has a global magnetic field, but spacecraft observations have revealed magnetic "anomalies" over some parts of the planet's surface.

The orbiter has three instrument packages. The Particles and Fields Package will characterize the solar wind and its interaction with the planet’s ionosphere and crustal magnetic fields. These crustal fields are wicked cool: they emanate from certain parts of the surface that were impact-heated, then cooled during the era that Mars still had a global field. As the rock cooled, the global field was basically copied onto it, frozen in place to remain long after the larger planetary field disappeared. A loose way to imagine them is like big magnetic bubbles glommed onto the planet, large enough to stick up into the upper atmosphere.

The Remote Sensing Package will determine global characteristics of the upper atmosphere and ionosphere via remote sensing. Lastly, the Neutral Gas and Ion Mass Spectrometer will measure the composition and isotopes of neutral ions.

Together, these instruments will address MAVEN’s four science goals:

The orbiter will pursue these in a 1-year nominal mission that will take it zipping in and out of the atmosphere. When it reaches Mars in September 2014 (around the same time as India’s MOM craft), it will enter a highly elliptical orbit of 4.5 hours, at its farthest 6,000 km (3,700 miles) above the surface and at its nearest 150 km, low enough to dip into the upper atmosphere and directly sample the gas’s composition. It will also take five “deep-dip campaigns” down to 125 km, taking it to the top of the well-mixed lower atmosphere. Each dip is over a different part of Mars and in a different location with respect to the Sun, allowing the team to measure the Sun’s varying influence on the atmosphere.

The team designed the mission to answer all its science questions in one year, but the craft has enough fuel to last about a decade. An extended mission would provide more information about how the changing solar cycle affects the atmosphere, potentially illuminating more of what happened in the past, when the Sun didn’t always behave the way it does now. So if all goes well, we could be hearing from MAVEN (and any surface rovers using it as a relay to talk with Earth) for a long time.

Below, you can watch a time-lapse video of the mission’s assembly. MAVEN went through weeks of processing to prepare it for its 10-month voyage to Mars, condensed down to about 2.5 minutes here. The video zooms in to a closer view around 1:30.