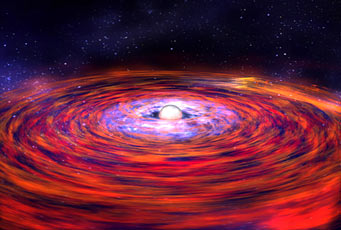 An artist's symbolic portrayal of gas spiraling onto a neutron star. The closer the gas spirals in, the faster, hotter and brighter it gets.

Here's a story from the way-cool-physics department: Two teams of astronomers have used a new technique to find the maximum diameters of several neutron stars to an accuracy of a few percent. They did it by measuring effects of both special and general relativity on gas orbiting just above the objects' surfaces.

Neutron stars are extremely dense balls of almost pure neutrons, in which roughly 1.4 times the mass of the Sun resides in a sphere about 30 kilometers (20 miles) across. Their exact diameters should tell about possible exotic new states of matter inside them. But measuring their sizes reliably is tough.

One of the two teams used the Japanese/NASA Suzaku X-ray observatory to examine three neutron stars in binary systems: Serpens X-1, GX 349+2, and 4U 1820-30. Another used the European Space Agency's XMM-Newton X-ray telescope to study Serpens X-1. Both groups examined spectral lines of X-ray emission from iron atoms in superhot gas that's orbiting at about 40% of light speed just above the neutron stars' surfaces.

Ordinarily, you'd expect the spectral lines to be broadened symmetrically — because some of the iron atoms are coming around the edge of the star star toward us, while an equal number are departing around the star away from us. So we should see equal numbers of redshifted and blueshifted X-ray photons.

But when the speeds involved are a fair fraction of the speed of light, several relativistic effects come into play and turn the spectral lines' profiles asymmetric. The lines are smeared not just by the Doppler shift, but by beaming effects predicted by Einstein's special theory of relativity. Moreover, the warping of space-time by the neutron star's powerful gravity, due to Einstein's general relativity, shifts the iron lines to longer wavelengths.

Previous X-ray observatories detected iron lines around neutron stars, but they lacked the sensitivity to measure the shapes of the lines in detail.

If you're a proper physics geek, this stuff is neat beyond words.