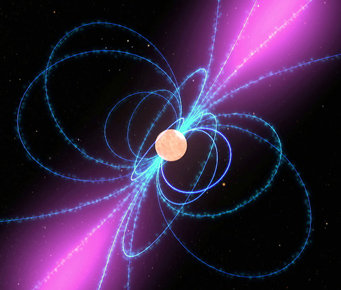 Clouds of charged particles move along the pulsar's magnetic field lines (blue) and create a lighthouse-like beam of gamma rays (purple) in this illustration. Click image for larger view.

Astronomers have discovered nearly 1,800 neutron stars. These collapsed cores of massive stars are among the most bizarre denizens of the cosmic zoo, each one packing more than a Sun's worth of mass into a city-sized sphere. But according to the first major published result from NASA's recently launched Fermi Gamma-ray Space Telescope, there could be large numbers lurking out there just waiting to be found.

Almost all known neutron stars are also known as pulsars, because they emit pulsed beams of radio waves or X rays that sweep past Earth like lighthouse beams. But on most occasions, these beams miss Earth, making the neutron star effectively invisible at radio or X-ray wavelengths. But according to some theoretical predictions, a pulsar's gamma-ray beam should be wider than a radio or X-ray beam, making it more likely that its beam would illuminate Earth. The key is to have a gamma-ray satellite sensitive enough to detect these beams, and measure their pulsations.

During the 1990s, NASA's Compton Gamma-Ray Observatory discovered dozens of mysterious gamma-ray-emitting objects in the plane of our Milky Way Galaxy. But Compton lacked the spatial and time resolution to pin down the nature of these sources. Astronomers suspected that some or most of them are neutron stars, but scientists knew that a good fraction of them might be background galaxies or some other type of object.

In just a week of observing during its July commissioning phase, Fermi's primary instrument, the Large Area Telescope (LAT), has resolved any lingering uncertainty about one of these unidentified sources: a bright gamma-ray-emitting object at the center of a supernova remnant known as CTA 1, located about 4,600 light-years from Earth. With the LAT's vastly improved sensitivity and timing capability, it not only detected the source easily, it found that it is pulsing with a frequency of 0.317 second. In other words, the object rotates on its axis 3.17 times per second. Based on this result, and its energy pattern, the object must be a pulsar. 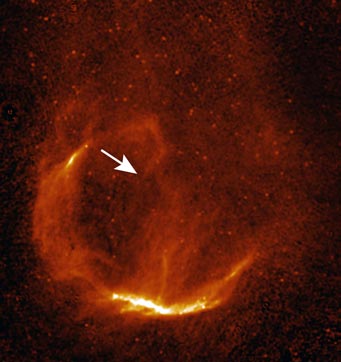 This map of CTA 1's 21-centimeter radio emission highlights the supernova remnant's expanding shell. The shell is about 1.5° wide, three times the apparent size of a full Moon. The pulsar's position is arrowed. CTA 1 is located in the constellation Cepheus.

"This is the first pulsar discovered only through gamma-ray pulses. This is an exciting result because it means that a lot of pulsars are hidden," says Fermi science team member Alice Harding (NASA/Goddard Space Flight Center), coauthor of a paper on the discovery that appears in the October 16th issue of Science Express. Harding points out that deep observations of CTA 1 at radio and X-ray wavelengths have yet to reveal any hint of pulsations.

"Fermi is doing exactly what we expected it to do: find all these pulsars in gamma-rays that we don't see in the radio," adds radio astronomer Michael Kramer (University of Manchester, UK), who is not on the discovery team.

Harding predicts that many of the unidentified Compton sources will turn out to be pulsars, and that Fermi will see many new sources that will also be pulsars. Studies of these neutron stars will provide clues that will help astronomers piece together the life cycle of neutron stars, and how pulsars emit their beamed radiation.

Kramer points out another important implication. Neutron stars are born in supernova explosions, but many remnants of these explosions lack neutron stars. "It's great that we will start to populate these previously 'empty' supernova remnants with neutron stars that are now at least detectable at other parts of the spectrum," he says.

The discovery also demonstrates that the $690 million Fermi observatory, formerly known as GLAST, is living up to its billing. The spacecraft and its instruments are performing as expected, and it's 5-year mission of scanning the gamma-ray sky at depths never before possible is just getting started. Says Harding, "This is just the first of many exciting things to come."

If my math is good, this object rotates 3.15 times a second on its axis. I confess this is a very small difference but if the star had a frequency of, say: 0.2 second, it would rotate 5 times in a second.
By the way, if there are so many neutron stars undiscovered, they could make a substantial part of dark matter.

This is a comment on the paper about pulsars, If a pulsar has a period of 2 seconds then its frequency is 2 pulses per second. Frequency and period are reciprocals. Of course they have different units!

We're almost there, I will try to integrate the truth of the above two postings... The period is the time necessary to perform an action once. The frequency refers to how often an action occurs. If T is the period of a pulse, and f the frequency of a pulse, then both are correlated by the formula f = 1/T. The units are: seconds (or any other time unite) for T and the inverse of seconds (or other time unit) for f.