NEAF: Bigger and Better Than Ever 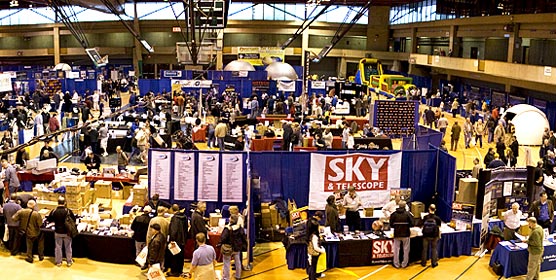 Last weekend the Northeast Astronomy Forum and Telescope Show (NEAF) celebrated its 20th anniversary with a bang. NEAF happens every year at Rockland Community College in Suffern, New York. The crowds this time were bigger than in the past two years; amateur astronomy seem to be in the leading edge of the economic recovery.

Sky & Telescope has sponsored and supported NEAF for many years, and of course we were there again. People continually stopped by our booth and told us they were having a great time, were impressed by the vast amount of equipment on display, and felt the event was a major success. More than 140 exhibitors set up booths, with many unveiling exciting new products. 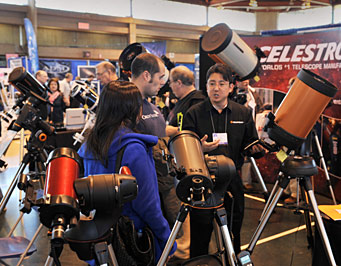 The event kicked off on Thursday and Friday with the Northeast Astro Imaging Conference (NEAIC), where 175 astrophotographers of all experience levels convened at the nearby Crown Plaza Conference Center for workshops and presentations by scientists and well-known imagers. The strength of this annual imaging conference is its balanced group of presenters covering all aspects of astro-imaging, from creating aesthetically pleasing compositions to collecting quality data for research.

Among the highlight speakers at NEAIC were Steven Howell of NASA’s Kepler Mission on Kepler's photometry and Olivier Thizy on how to get started performing your own spectroscopic studies. Mike Simonsen of the AAVSO discussed variable star observing and an upcoming new survey that will search for new variables. S&T’s imaging editor Sean Walker discussed his narrowband nebula survey project of the winter Milky Way, undertaken with senior editor Dennis di Cicco, and gave tips for those interested in delving deeper into their own data to unearth potential discoveries. 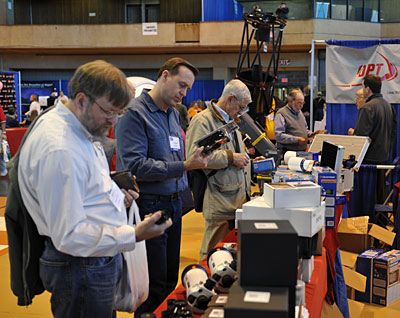 For attendees just starting out imaging, Jerry Lodriguss dispelled many myths about DSLR cameras, while Dave Snay gave a hugely popular 4-part workshop on introductory astrophotography. In the aesthetic-imaging camp, Warren Keller also gave a great presentation on image processing, while Alan Friedman showed us the beauty of the Sun in hydrogen-alpha light. NEIAC closed with imager Thierry Legault revealing the secrets of his astounding high-resolution views of the International Space Station, as well as catching it transiting the Sun and Moon. 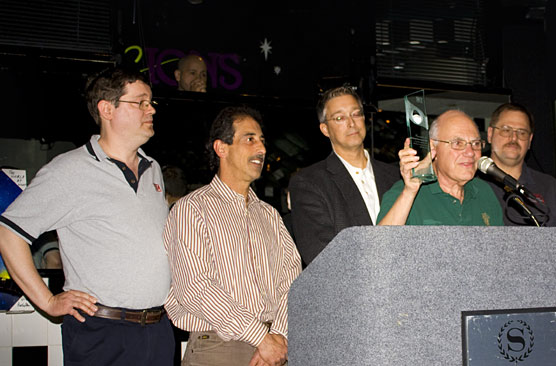 Al Nagler of Tele Vue Optics, who played a crucial role in NEAF's early years, displays the 20th anniversary award given by S&T editor in chief Bob Naeye (left). Second from left is NEAF director Alan Traino; next are Ed Siemenn and (on right) Jim Burnell of the Rockland Astronomy Club.

On Friday evening S&T held its annual reception for NEAF vendors, exhibitors, and friends. Here editor in chief Robert Naeye presented the Rockland Astronomy Club, which owns and runs NEAF, with an award (above) to commemorate the event's 20th year. Naeye noted that NEAF is far more than just a trade show, and that it's the largest event of its type in North America and possibly the world. He congratulated the organizers, volunteers, and vendors who keep NEAF running smoothly year after year. 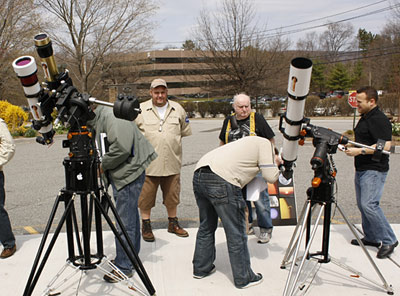 Solar observing after the storm.

As soon as the main show opened Saturday morning and people flooded onto the exhibit floor, it was clear that attendance for this year’s NEAF would exceed the past two. This despite the rainstorm on Saturday that prevented solar observing. Fortunately the weather cleared on Sunday, and attendees were treated to beautiful views of a surprisingly active Sun through numerous telescopes and filters. 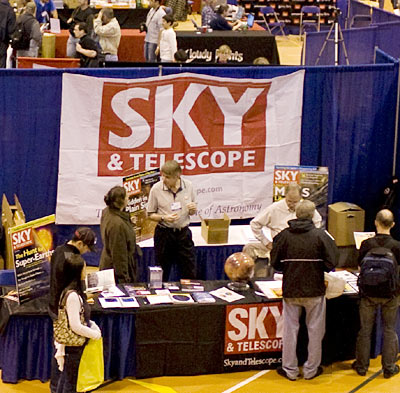 The International Dark Sky Association also held its annual conference during the show, including a dinner reception.

"People were constantly coming by our booth, chatting, giving suggestions and telling their stories," said MacRobert. "Every year this is such a great place for us to reconnect with our constituency."

Editors of course were also out roaming the floor, cameras and notebooks in hand. S&T will be covering new products and trends on display.

Click here to see videos from the showroom floor.

Man, I wish I could have been there, but I live in Minnesota and I'm only 13, so I couldn't exactly drive there. Is there anyone who lives around the Minneapolis area that knows of any star parties within 100 miles or so, because in that recent article about major star parties there were none around this area really.

The East Central Minnesota Astronomy Club has listed a star party for 5/7/11 in Mora, MN. You can find star parties & clubs at http://www.nightskynetwork.org/. Hope this helps. Enjoy!

The video about the awesomeness of the JWST is, well, awesome.

The video about the awesomeness of the JWST is, well, awesome.