Two brilliant white spots have emerged in Jupiter's North Tropical Zone (NTrZ) and North Temperate Belt (NTeB) as seen in an image taken yesterday, March 29th, by Zac Pujic of Brisbane, Australia. A similar event happened in 1990, when the North Temperate Belt began a vigorous revival with rapidly moving details. Observers are urged to watch the new disturbance as intensively as possible. It could spread very quickly in longitude. 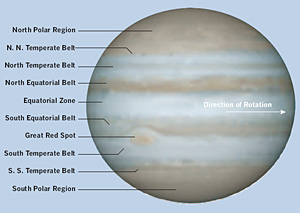 Jupiter's cloud pattern of belts and zones has remained remarkably constant over the last century. Yet when seen at high magnification, the various regions display an ever-changing array of small wisps, spots, and whorls, a dynamic weather system driven by high-speed winds.

The 1990 event was studied by an international team of professional and amateur astronomers, who published their findings in Icarus in 1991 (“A Disturbance in Jupiter’s High-Speed North Temperate Jet During 1990," issue number 94, page 92).

Images may be submitted to the Association of Lunar and Planetary Observers (ALPO).

Any major updates will be announced via subsequent AstroAlert messages. Good luck, and clear skies!