Slightly distorted images of distant galaxies are giving astronomers a big-picture view of where the universe’s dark matter hangs out. The results, reported January 9th at the American Astronomical Society's winter meeting, represent the largest-scale survey yet of the unseen stuff that makes up more than 80% of cosmic matter. 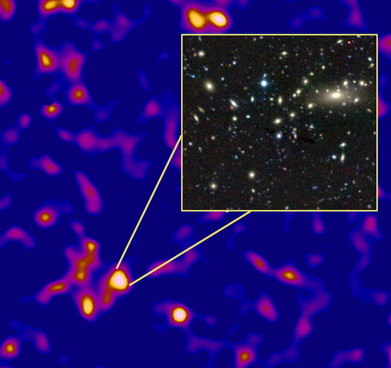 Part of the team’s initial results are two-dimensional maps of the dark matter’s structure. The maps reveal clumpy filaments outlining gigantic empty spaces, closely — though not exactly — aligned with where visible galaxies cluster. The web looks much like detailed theoretical simulations produced a few years ago by the Millennium Simulation project at the Max Planck Institute for Astrophysics. But these maps are real.

“This is an amazing, amazing result,” says Jason Rhodes (JPL), who attended the team’s afternoon science session. The project — the Canada-France-Hawaii Telescope Lensing Survey (CFHTLenS) — is not the deepest survey ever conducted, “but it’s still very impressive.”

CFHTLenS looked at more than 10 million galaxies in four patches of sky, covering a total of 155 square degrees — about the area covered by your outstretched palm, says team member Catherine Heymans (University of Edinburgh). The light from these galaxies doesn’t come to Earth in a straight line. Instead, the light is “weakly lensed,” distorted slightly as it passes matter lying between the galaxy and us.

The distortion happens because matter creates wells in the fabric of space-time, much like what happens when objects are set on a stretched rubber sheet. A marble rolling on that sheet won’t follow a straight line; instead, it’ll follow the rubber’s curvature. The same thing happens to photons coming to us from faraway places: matter along its path acts like a lens and bends the path from a straight line. Strong lenses create mysterious arcs of light, such as those seen several years ago by the Hubble Space Telescope’s Advanced Camera for Surveys. But the galaxies in this survey are lensed only about 1%, nowhere near enough to create such banana-shaped images. 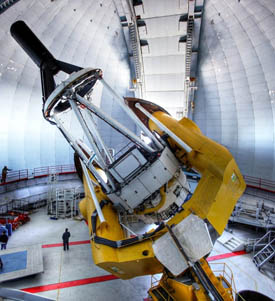 Operating since 1979 from the summit of Mauna Kea, the Canada-France-Hawaii Telescope has an aperture of 141 inches (3.6 m). At upper right, where an observer's cage once was, is a new wide-field infrared camera called WIRCam.

“If you drew a circle and distorted it by one percent, you would not be able to see it by eye,” Rhodes says. Analyzing the observations was a technical feat, requiring the researchers to deal with sources of error that could introduce fuzziness greater than that tiny signal. Team member Thomas Erben (Bonn University) noted with a wry smile that they originally expected the analysis to be done in one year. It took four.

“This is 100 times larger than any previous deep survey,” Heymans says. While the web looks delicate, the structures it marks are humongous. The largest shot of the sky, that taken in winter, spans 1 billion light-years.

“If you focus on the highest mass places . . . those are really hosting giant monsters, clusters of galaxies,” says team member Ludovic Van Waerbeke (University of British Columbia), pointing out bright knots in one of the images. The mass of the largest clusters is on the order of 100 trillion times the mass of the Sun, he says. “Those are really, really, really big clusters.”

The results are still preliminary. The team hasn’t completed a three-dimensional map yet, nor are the astronomers sure the small discrepancy they currently see between where the galaxies are and where the dark matter lies will prove to be real as they continue their analysis. As of yet the project has found nothing that disagrees with modern cosmological theories, including Einstein’s theory of gravity.

The dark matter is uncountable 99.9 % occupied in the universe. My opinion,You can zoom bright universe objects in the universe follow galaxy, nebula, black hole, clusters, even in the sun, black sun spots appearing dark due to catalyst.
Sam.G
SRCOM
Madras
India
Space Research Center Of Madras

It is an interesting theory, but it is still founded on a completely hypothetical leap: anti-matter is gravitationally repulsive to regular matter, but attracts itself. While there is no experimental evidence against this, there is none fore it, either. Since antimatter has energy and energy is equivalent to mass in GR, it seems like this would violate GR.