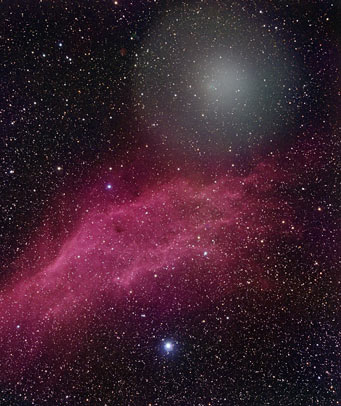 On the evening of March 5th, big dim Comet Holmes was passing big dim NGC 1499, the California Nebula in Perseus. For this image Dennis di Cicco took 30-minute exposures through blue and green filters and a 50-minute exposure through a red filter, using a 5-inch Tele Vue NP127is refractor and an Apogee U16M CCD camera. Click image for larger view. (Look carefully at the large view and you'll see the faint nucleus of the comet as a tiny red-green-blue streak; it moved between the three exposures.) The field is roughly 3° tall, with north up.

I love celestial coincidences. There are just so many of them.

Why do some of the closest bright stars to the solar system lie in front of the bright stars of the winter Milky Way? This foreground and background have nothing to do with each other, but they combine to make our winter evening sky especially starry-bright.

Why, from Earth's viewpoint, do planets shine just about as bright as the brightest stars?

Why are the apparent sizes of the Moon and Sun so nearly alike? They're just right to give us the most spectacular-looking (if rather rare) total solar eclipses.

You might think there was some sort of astronomical trickery going on, if you didn't know the real reason. Our brains are hard-wired to overinterpret. That is, we err on the side of seeing patterns and meanings where none exist, rather than the other way around. For good evolutionary reasons. It was a lot safer in the jungle to mistake a pattern of shadows for a tiger than to mistake a tiger for a pattern of shadows. For millions of years, those who erred on the side of over-interpreting tended to live longer, and have a chance to reproduce and become your ancestors, so you carry their brain structures. And therefore even today, your child sees a heap of laundry in the night and screams that he sees a crouching monster.

And on a happier note, we interpret the random scatterings of stars in the sky as fairytale people and animals, objects and heroes, each with a made-up story.

For the next several days there's a very photogenic coincidence in the sky that's no illusion. Comet Holmes is passing the big, dim California Nebula in Perseus. (Ever wonder why we map-reading creatures see a California in space?)

Last night S&T's Dennis di Cicco took the picture above. Both objects are much too dim to show their colors to the eye, even in a rich-field telescope. In fact, they're so dim that they may be invisible to the eye altogether. But the color contrast is real, as the camera shows.

The comet glows mostly by yellow-white sunlight reflected from dust. The red light of the nebula comes from hydrogen atoms excited by ultraviolet light from the hot, bluish star Xi Persei at the bottom of the picture.

The comet is moving so slowly across the sky (from right to left in the image) that it will remain near the California Nebula through about next Wednesday, March 12th. (See chart.) Astrophotographers take note.

Wow! Hard to believe no one has posted a comment yet about this great shot. Let me be the first to offer congratulations for such a great image! You can photograph the California nebula at any time, but comets come with a sense of urgency that's missing with the usual astrophoto targets. I imagine that you have taken several shots of Comet Holmes moving across the California Nebula. If you have, please publish two of them, side-by-side, as a 3-D stereo pair in the pages of Sky & Telescope. The movement of the comet would make the 3-D effect possible.

You have enlightened my life over the years in S&T with your articles, reviews, photos, etc...including this spectacular picture. But nothing will ever top (in my opinion) the "greatest shot of the 20th century," YOUR ANALEMMA PHOTO!