A brilliant Perseid flashes across the constellation Andromeda on August 12, 1997. Rick Scott and Joe Orman made the 8-minute exposure in Florence Junction, arizona, using a 21-millimeter f/2 lens and Ektachrome P1600 film.

The thin crescent Moon sets early on the evening of August 12, 2002, leaving the sky fully dark for this year’s Perseid meteor shower. The display should peak later that night for observers throughout the Northern Hemisphere, especially as morning twilight begins. That’s when the radiant (the patch of sky between Perseus and Cassiopeia from which the Perseids appear to come) is highest in midnorthern latitudes. Skywatchers can expect to see 60 or more Perseids per hour, provided the sky is very clear and dark.

If you miss the Perseids that night, all is not lost. The shower lasts for two weeks or so, with excellent rates in the predawn hours of August 10th through 15th. Far fewer meteors will appear before midnight, even on the night of the shower’s maximum, because the radiant is then quite low in the sky. The radiant is always low or below the horizon for countries like Australia, New Zealand, and South Africa, where few, if any, Perseids can be seen.

The 1992 return of Comet Swift-Tuttle, parent comet of the Perseids, brought with it a “new peak” that was superimposed on the shallower, traditional Perseid maximum. By 1999, however, the new peak had greatly subsided
(Sky & Telescope: August 2001, page 108),
and it's completely missing from analyses of the 2000 and 2001 Perseids by the International Meteor Organization. So the forecast for 2002 reads much as it would have in the 1980s: the Perseids should peak for 12 hours or more, centered on the time when the Sun’s ecliptic longitude is 140.0° (equinox 2000.0). That translates to 22h Universal Time on August 12th this year. European observers are optimally positioned for the Perseid peak, but North Americans aren't far behind.

The Perseid meteor shower radiant (the apparent point of origin of the meteors) is located part way up the sky in the NNE at 11 p.m. in mid-August.

Simply counting meteors is one good way for amateurs to contribute to meteor science. The techniques are explained in the meteor section of this Web site. But the Perseids are a reliable shower, rich in bright meteors with long-lasting trains, and skywatchers may find other projects almost irresistible. 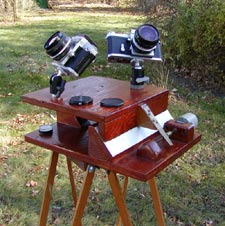 Perseids can appear anywhere in the sky, so several cameras can be placed on a single motor-driven mount or tracking platform. Sky & Telescope senior editor Roger Sinnott used this setup during the 2001 Leonid shower.

The guidelines for capturing meteors on film couldn’t be simpler. You put fast film in the camera, set the lens wide open, and make time exposures to the sky-fog limit (generally 2 to 10 minutes, which can be determined only by prior tests under similar conditions). A tracking mount is optional, for your goal is to record spectacular meteors, not needle-sharp views of constellations.

Unfortunately, results will be hit or miss. Only once in my life have I caught more meteors on film than the number of frames I’ve exposed, and that was last November during the Leonid shower. (I got 70 trails in 39 frames!) No one expects anything like that from the Perseids, where a single meteor per roll of 36 exposures is the norm — if you’re lucky. But your choice of equipment has a lot to do with success rates.

Should a wide-angle lens be used, thereby taking in a huge expanse of sky? Or is a big telephoto better, with its greater light grasp? Strange as it may seem, the answer is neither. A 50-millimeter f/1.4 lens will capture many more meteors than a wide-angle or telephoto lens on the same 35-mm camera, as explained in “The Optimum Camera for Meteors” (Sky & Telescope: February 1994, page 85). Using that article’s analysis, German amateur Ulrich Beinert has written a computer program that quickly rates various lenses and film formats for efficiency; it can be downloaded from his site.

To date, digital cameras haven’t made a serious inroad into meteor photography. Electronic noise usually limits their exposures to a minute or less, and a change of batteries may be needed during a long imaging session. But the results should be similar to those achieved with fast film. Far better would be a cooled (astronomical) CCD coupled to a camera lens.

Using identical cameras 3 kilometers apart and coordinating their exposures by CB radio, William H. Bonney and Steven Simpson caught this interloper during the height of the Perseid shower on August 13, 1985.

When the same meteor is imaged from two locations, the trail appears shifted with respect to background stars. And if the cameras are just a few kilometers apart, the result can be a visual, even visceral proof that the object is coming right toward the observer!

Picking the 1985 Perseid shower as a prime opportunity to catch a meteor in stereo, William H. Bonney and Steven Simpson stationed themselves on Wachusett Mountain and Brown Hill in central Massachusetts. Their striking image pair (above) actually shows a Kappa Cygnid, not a Perseid.

An image intensifier almost guarantees you’ll record more meteors than you could photograph or see directly. The key is to use a third-generation image-intensifier tube, such as the Collins I3 Piece (see Dennis di Cicco’s review in

Sky & Telescope, the February 1999 issue, page 63).
A fast conventional camera lens goes in front, and a regular camcorder (of any type) is coupled to the back of the intensifier to videotape its bright phosphor screen. But the cost of this equipment, several thousand dollars, puts it beyond the budgets of casual observers.

Perseids on the Moon 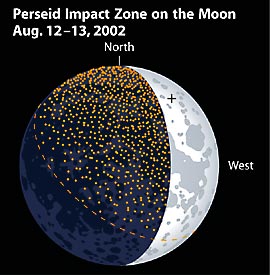 This year’s crescent Moon presents a large, darkened region within which the impact flashes of meteoritic particles from the Perseid stream might be seen. In this view, adapted from one prepared by Peter Gural for the Association of Lunar and Planetary Observers, a cross marks the location on the Moon’s sunlit crescent where the radiant is overhead near 0h Universal Time on August 13th.

What would make a fine project for the evening hours of August 12th, when few Perseids are expected in the Earth’s night sky? Looking for impact flashes on the Moon, of course! The diagram at left shows the portion of the Moon’s dark hemisphere where visible flashes may occur. Observers should note the exact time and location of any flashes seen or videotaped with their telescopes.

No one will believe that you’ve got a true impact, however, unless your description matches that of another observer elsewhere. Videotapes of the Moon with sensitive cameras are especially prone to “false positives.” In fact, the very idea that a meteoroid might produce a visible flash on the Moon was widely pooh-poohed in scientific circles until the Leonid shower of November 17–18, 1999.

On that evening, Texas amateur Brian Cudnik was scrutinizing the darkened part of the Moon with the Houston Astronomical Society’s 14-inch telescope when he saw a yellow-tinted flash as bright as a 3rd-magnitude star. Some 2,000 kilometers away in Maryland, David W. Dunham was videotaping the Moon with his 5-inch Celestron telescope. Upon receiving Cudnik’s enthusiastic report, Dunham carefully played back his tape — and, sure enough, it showed a flash in the same general area, occurring within 1 second of the time reported by Cudnik
(Sky & Telescope: June 2000, page 36).
Overnight, a new branch of meteoric study was born.

Cudnik now coordinates lunar-impact observations for the Association of Lunar and Planetary Observers. For more about the techniques involved, visit his Web page.