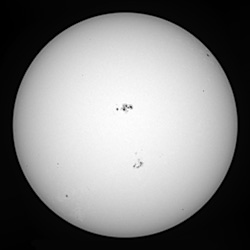 Two sunspots that generated numerous solar outbursts in late October 2003 are again visible on the solar face. Active Regions 10507 and 10508 are the upper and lower spots (respectively) near the center of the solar disk. The upper sunspot group is visible without optical aid (but a safe solar filter is required).

The immense sunspot group that on November 4th ejected the largest solar flare ever recorded has rotated around the Sun and is back for a second pass across the Earth-facing side of the solar disk. Active Region 10507 (known as 10488 during its previous pass) is situated above another sunspot group, 10508 (formerly 10486); both are located near the center of the solar disk as seen at left. Group 10507 is large enough to be visible without magnification — all you need to see it is a sunny day and a safe solar filter. Of course, a properly filtered telescope makes the view even better.

The Sun turns on its axis roughly once a month, so the two large spots at the center of the solar disk will remain on the Earth-facing side of the solar disk until early December. Remember, never look at the Sun without proper eye protection. There are a variety of ways to safely observe the Sun, many of which can be found in the solar observing section of our Web site. If it's cloudy, you can check out the solar disk on the SOHO Web site (click on "Latest Images" followed by the link to "Near real time images").

Can This Near-Earth Asteroid Help Us Understand the First Interstellar Visitor?