Remember Comet Holmes? In 2007 it exploded from practically nothing to become a weird, slowly expanding, glowing ball easily visible to the naked eye for several weeks. It brightened by about 14.2 magnitudes: half a million times.

Now something similar, though less dramatic, has happened to Comet C/2012 X1 (LINEAR) in the pre-dawn sky. It has flared up by 6 magnitudes, or 250 times, to reach magnitude 8. It's another glowing ball, as seen below. Though its low altitude at the beginning of dawn may be a problem for detecting it in a telescope, astrophotographers have a better chance with their techniques for suppressing skyglow 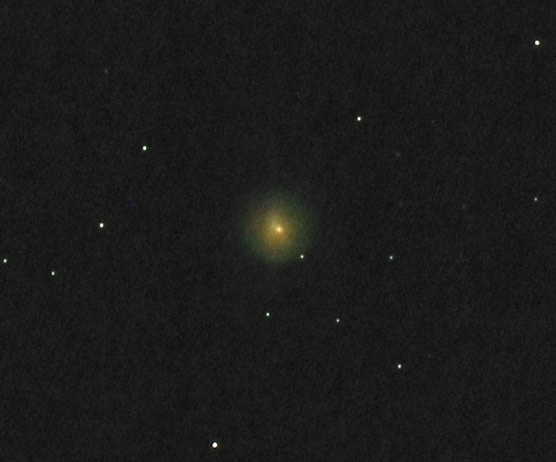 The exploded ball of Comet 2012 X1 (LINEAR) appears just over 2 arcminutes wide in this image taken on the morning of October 22nd by Maximilian Teodorescu of Dumitrana (Ilfov), Romania. He estimated it as between 7th and 8th magnitude. He used a 115mm f/7 apo refractor for 28 exposures 20 seconds long; the comet and stars were processed separately. North is upper left. Click image for wider view.

The comet is in Coma Berenices, barely above the western horizon in evening twilight, but it gets higher above the eastern horizon just before dawn begins. (Find when dawn begins at your location by putting your location into our online almanac. If you are on daylight saving time like most of North America, make sure the Daylight Saving Time box is checked.)

Comet C/2012 X1 is moving slowly eastward against the stars — slowly because it's far from both Earth and Sun: 3.0 and 2.2 astronomical units, respectively. It will pass close by Arcturus on November 17th. The farther north you are, the better.

Here are a map and light curve and a more detailed daily ephemeris for months to come.

For each, check these tables to find the comet's celestial coordinates and its altitude (h) and azimuth (A, counting from south) at the start of dawn for an observer at 35° north latitude.

New pic from October 26th showing the glowball grown to 260 arcminutes in diameter, taking on a comet-head shape, and displaying four weak streamers or jets within it.

More images showing the development of the outburst, from the Comet Gallery of The British Astronomical Association.