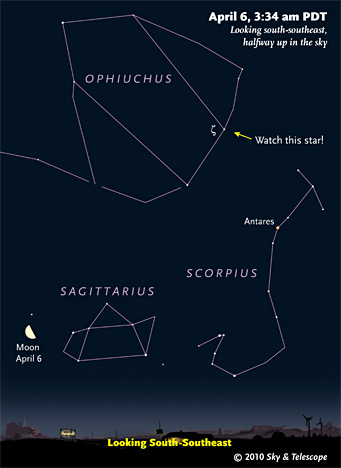 This chart shows which star to watch in the constellation Ophiuchus. The time given, 3:34 a.m. PDT, is for people in the Los Angeles area. Click here for a larger view.

For millions of people next Monday night/early Tuesday morning, April 5-6, 2010, the naked-eye star Zeta (ζ) Ophiuchi will be occulted for up to 8 seconds when a passing asteroid, 824 Anastasia, blocks it from view. The 25-mile-wide path for seeing this event goes right over the Los Angeles region at about 3:34 a.m. PDT, then up through parts of Nevada, Idaho, western Montana, and finally almost right over the cities of Calgary and Edmonton, Alberta, around 4:40 a.m. MDT.

This is the brightest asteroidal
occultation (eclipse) ever predicted for North America involving an asteroid
this large. The International
Occultation Timing Association (IOTA) encourages as many as
possible to try to see and time the event. This will let us obtain a detailed outline of the asteroid and accurately
measure its size and shape.

Not just amateur astronomers, but anyone
with the most rudimentary knowledge of the sky can find the 2.5-
magnitude star from the chart at right. Seeing a star suddenly vanish, then abruptly reappear several seconds later, is something you never forget.

Basically, try to time the start and duration of the eclipse with whatever resources you have, even if that's just your eyes and ability to count. You don't even need binoculars — although, if steadily held (such as against a fence post), binoculars would give a
better view.

The star is bright enough to record with many
camcorders, especially those with "night" modes. Very accurate
observations can be made with such camcorders, so if you have one
you are encouraged to use it. Time accurate enough for this event can be obtained here.

Much more information, links to detailed maps of the path, and ways to time this event with simple techniques are given on this page that Brad Timerson has put on IOTA's website. Here's one example: The blue lines mark the nominal 25-mile-wide path within which the event can be seen in the Los Angeles area. But this path isn't perfectly known in advance and could shift to the left or right. It will probably fall somewhere between the red lines. However, there's almost no chance it would shift outside the gray lines.

After we collect as many reports as possible, our findings will be posted on IOTA's asteroidal occultation results website. (Take a look at it now for an idea of the information we've learned from other such events.)

We look forward to adding your observation to the outline of
Anastasia that we hope to obtain following the April 6th occultation.

If you are in the region of possible visibility (Southern California to Alberta), I urge you to pass this information on to friends, and especially to distribute it on astronomical-society list servers so that nearly everyone in organized astronomy clubs throughout the region can learn of this rare event. You might even contact local media and help them prepare short messages pointing to the website page already mentioned. For general consumption, I recommend using the more familiar term "eclipse" rather than "occultation," but you can explain that "occultation" is the astronomical term used for phenomena like this.