Many of us have grown accustomed to having Astronomy Day fall in late April or early May, which is when this stargazing celebration has been observed since its inception. And in fact this past April 21st amateur astronomers around the world did host hundreds of events.

But this year the Astronomical League, which represents 240 astronomy clubs across the US and which coordinates the event, is trying something different. League officials are exploring whether to move Astronomy Day to later in the year. The reason is that in many parts of the U.S., Canada, and Europe, the evenings in April and May can still be downright chilly, even raw.

So 2007 and 2008 will each feature two dates — one in late spring (for us northerners) and one in early fall. This year that latter date is September 15th, which is this weekend. Check the League's Astronomy Day listings to see if an astronomy club near you is putting on something special. Or your can contact a club directly. 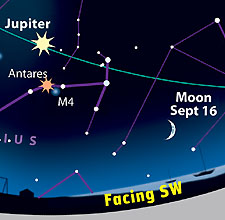 A portion of the all-sky map from September's Sky & Telescope shows a few of the celestial treats visible this weekend. Click on the image for a larger version.

Even if you're on your own this weekend, don't miss the chance to head outdoors. There'll be a lovely crescent Moon, fresh from its rendezvous with the Sun a few days ago. Jupiter continues to reign supreme over the evening's stars, and you can still catch some late-summer treasures in the southern Milky Way. Dial up a customized view of the sky you'll see tonight using our interactive sky chart.

In fact, why not set up your scope in your driveway instead of the backyard? That way you can show a celestial showpiece or two to passers-by — and, in your own way, you'll be fulfilling the Astronomy Day credo: "Bringing Astronomy to the People"!