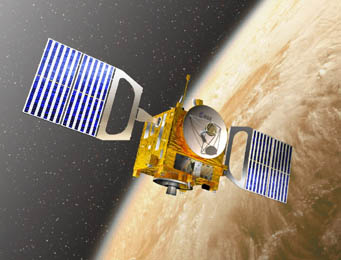 Artist's impression of Venus Express in orbit. After a 153-day cruise from Earth, the spacecraft entered Venusian orbit on April 11, 2006.

The Venus Express spacecraft launched by the European Space Agency (ESA) in November 2005 has been orbiting our sister planet since April 2006, probing its atmosphere with cameras, spectrometers, and other instruments.

To support the space mission, which will extend until at least April 2009, project scientists are inviting amateur and professional astronomers to contribute Earth-based images of the planet made at infrared, visible, and ultraviolet wavelengths. Last October 29th they unveiled a new website with the goal of making it easier than ever to submit images to the Venus ground-based Active Archive (VAA). The website includes lots of useful information on the project's goals, as well as detailed information specifically geared to observers imaging the planet with modest backyard telescopes. The site also offers ready access to photographs recently submitted to the VAA.

During the past few years, amateurs have made great strides recording Venus, especially at ultraviolet wavelengths (see Sean Walker's article, "Revealing the Clouds of Venus", in the October 2007 issue of Sky & Telescope). With the planet currently well placed in the morning sky for observing, now is a perfect time for many observers to turn the fruits of their hobby into valuable scientific contributions.

A Night to Howl at the Moon