When Giuseppe Piazzi discovered the first asteroid, 1 Ceres, on January 1, 1801, it was magnitude 8.0. This year you can see it nearly three times that bright, at magnitude 6.9, from mid-February through the first week of March. In fact, this is as close and bright as Ceres will become in our lifetimes.

Ceres reaches opposition on February 25th. Using the best available orbital elements and perturbation corrections, S&T’s Roger Sinnott finds that “on February 25th at 23.6 hours UT, Ceres will pass closer to Earth [1.583198 a.u.] than it has been since 1857. Ceres won’t be this close again until 4164!” 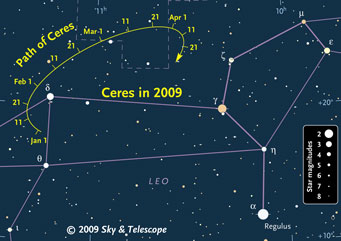 Click above for a full-page, printable, black-and-white chart in PDF format.

This happens because the asteroid is at perihelion, its closest to the Sun in orbit, just two weeks earlier. Winter oppositions of Ceres (winter in the Northern Hemisphere) are when it gets especially close and bright.

You can spot it with binoculars in Leo using the chart at right. (Click here for a full-page, printable, black-and-white chart in PDF format.) A typical binocular’s field of view is about 6° across; compare this with the ticks 10° apart on the chart's right edge.

With a diameter of 590 miles (950 km), Ceres is by far the largest asteroid and has enough gravity to pull itself into a reasonably round shape, making it the smallest known “dwarf planet” under the new, 2006 classification of the solar system’s minor bodies. It’s estimated to contain a third of the asteroid belt’s mass. NASA’s Dawn spacecraft is on its way to take up orbit around Ceres in 2015, after dallying at Vesta starting in 2011.

I wonder where I will be in 4164 - all I know I will be at least 2203 years young! - and will we have found out the answer to that elusive question, "What's at the end of the universe?"

The statement that Ceres is especially close when its opposition occurs during Northern hemisphere winter seems incorrect. Earth's perihelion occurs in January. Shouldn't we be closest when Ceres is at perihelion and Earth is at aphelion? i.e., a northern hemisphere Summer opposition with Ceres near perihelion? Correct me if I'm missing something. (Just being picky here - otherwise good article, great magazine, no complaints.)

The answer is already hidden in the question... As the eccentricity of Ceres's orbit is about 5 times greater than that of the earth's (0.0798 as opposed to 0.0167) it is the former which is the dominant factor. Therefore, Ceres will come closest to the earth when it reaches opposition around the point of perihelion, with a minimum distance of about 230 million kilometres as opposed to 300 million kilometres when opposition occurs around the point of aphelion. As the point of Ceres's perihelion lies in the direction of Leo (as seen from the sun), this event occurs (roughly) in February, i.e. during northern hemisphere winter.

Thanks, Marc. I'm used to thinking about low-Earth spacecraft orbits that evolve on relatively short time-scales. Ceres comes to perihelion at a particular location relative to Earth's orbit, and that doesn't change much from orbit to orbit. So Ceres perihelion and Earth aphelion just won't ever happen at the same time (or at least not for a very long time). Also, i hadn't realized Ceres' eccentricity was so much larger than Earth's; so, yes, i see now that its position is the dominant factor.
-J