The Quadrantid meteor shower peaks on the morning of Friday, January 4th, with the best viewing opportunity between 1 a.m. and dawn. As always, try to observe the shower from the darkest possible location. A 15%-illuminated Moon rises around 4 a.m., making a beautiful pair with Venus, but it's so thin and low that it won't light up the sky significantly. 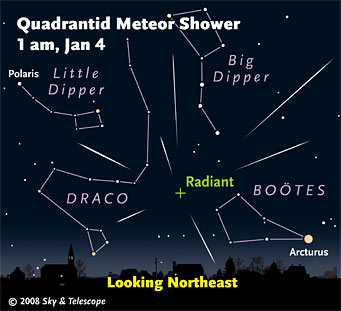 The Quadrantids got their name from Quadrans Muralis, one of many constellations invented in the 18th and 19th centuries that never quite caught on. The section of sky containing the shower's radiant has reverted to the genuinely ancient constellation BoÃ¶tes. When viewed from mid-northern latitudes, the radiant reaches a reasonable height above the horizon around 1 a.m., and is still getting higher at sunrise.

Depending on your point of view, the Quadrantids are the least-known major meteor shower or the best of the minor showers. They can be quite intense, with some people reporting more than one meteor per minute from dark observing sites. But whereas most showers are spread out over several days or even weeks, the majority of the Quadrantids fall in just a few hours. So your location is critical — you'll only see a spectacular display if the shower's radiant is high in the sky close to the time when the most meteoroids are hitting Earth's atmosphere.

This year, circumstances favor far-western Europe and eastern North America. But it's unclear which will see the better show. The International Meteor Organization predicts peak activity around 6:40 UT (1:40 a.m. EST), which would be ideal for easternmost North America. But noted meteor expert Peter Jenniskens, who has a track record of successful meteor forecasts, expects the peak around 2:00 UT, which would favor Europe. Jenniskens's website has a Java applet that predicts how many meteors you'll see at your location in both scenarios. Scroll about halfway down the page to find the applet.

Because the Quadrantids are so brief, and because they're only visible from northerly latitudes at the coldest time of night during the coldest part of winter, this shower isn't very well documented. There's a strong suspicion that the Quadrantids vary a lot from one year to the next, but this might just be a statistical fluke due to the relatively small number of reports. That makes your observations particularly valuable. See our article on Advanced Meteor Observing and the International Meteor Organization website to find out how to prepare a scientifically useful report.

Finally, make sure to stay warm. Bundle up in as many clothes as possible, paying especial attention to your head, and then snuggle into a warm sleeping bag. Relax in a reclining chair to keep you off the cold ground, and if possible, put an insulating pad between the chair and your sleeping bag. And don't forget to have fun!