The year's two best meteor showers, the Perseids in mid-August and the Geminids in mid-December, always share the sky with the Moon in similar ways. Each year the Geminid peak comes just four days later in the lunar cycle than the peak of the Perseids. So if the sky is dark and moonless for one shower, it's usually that way for the other.

Or the reverse. This year the Perseids were largely wiped out by the light of the full Moon. So a waning gibbous Moon will also compromise the Geminid shower when it peaks on the nights of December 13-14 and 14-15. The Moon rises in early to mid-evening on those nights, before the shower's radiant rises high and meteor activity picks up, and it blazes brightly for the rest of the night. 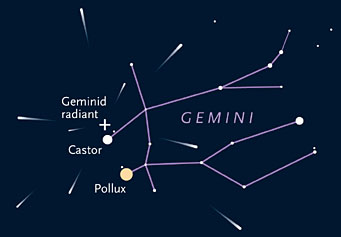 The radiant of the Geminid shower is near Castor, the fainter of the Twin Stars in Gemini.

Even so, you might still spot a few bright Geminids through the skyglow. If you see one of these "shooting stars," trace its path backward across the sky. If it was a Geminid, then this line, extended far enough, will pass Castor and Pollux in the constellation Gemini — well up in the eastern sky by mid- to late evening, and high overhead around 2 a.m.

During a meteor shower, Earth is crossing paths with a comet and plowing through a broad ribbon of particles shed all along its orbit. In the case of the Geminids, the comet is an object called Phaethon. Phaethon is classified as an asteroid (number 3200), but it's basically an extinct comet that has been heated by the Sun so many times that it's run out of gas. The particles that Phaethon spewed into space are still hanging around — and every year, in mid-December, we plow right through them.

By the way, you can learn more about the Geminids, along with other heavenly highlights for the coming week, by watching SkyWeek, S&T's great new weekly roundup.

I sat out, bundled to the hilt, blocking the bright glow of the moon by use of a knitted cap on the early morning of Dec.14. I witnessed 24 streaks of meteoric dust entering our atmosphere over what seemed to be hours. I wish I had a camera as one meteorite seemed to briefly tear a bright green to orange gap in the overhead night sky...very beautiful & memorable. That's all. I wished I had my camera.