Like many of you, I never head off to a star party without my trusty green laser pointer close at hand. These great and increasingly inexpensive gadgets have really revolutionized how we point out sights in the night sky to newbies and veteran skywatchers alike. 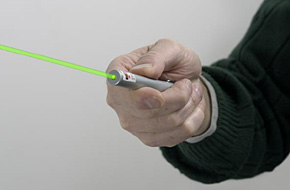 A typical green laser pointer, shown with a simulated beam. Its 5-mW laser emits an intense, narrow beam of light at a wavelength of 532 nanometers. At night the beam is visible for hundreds or even thousands of meters, depending on sky conditions. Devices like this can be purchased for less than $20 from many sources.

Also, like many of you, I'll admit to having a little "beam envy" — I sometimes get into friendly little competitions to see who's got the brightest laser. It's well known that the output can vary dramatically from one laser pointer to another, no matter what the label (or the dealer) might say. In fact, I've sometimes wondered why the beam on a particular model looked so anemic.

Now I know, thanks to a recent article prepared by researchers at the U.S. National Institute of Standards and Technology. It turns out that these laser pointers don't create green light from the get-go, but instead generate a collimated beam of infrared energy that's converted to green light when it passed through a special crystal. (Try saying "neodymium-doped yttrium orthovanadate" three times — I dare you!) 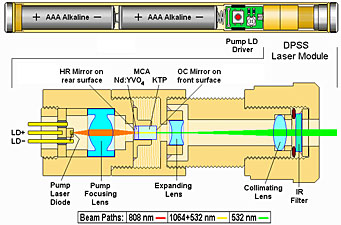 Cross-section of a typical green-light laser pointer. An infrared beam (808 nm) passes through a neodymium-doped crystal, which converts the energy to green light (532 nm) and longer-wavelength infrared light (1064 nm). Coatings and a filter allow only the green light to exit the device. Click on the image for a larger view.

In most units, a careful combination of transmissive and antireflective coatings, together with an infrared-blocking filter right at the end of the beam path, keeps all the infrared energy bottled up — all that comes out of that little hole is pure green light at a wavelength of 532 nm.

But the researchers found that really inexpensive green lasers not only have very poor conversion efficiency but can also lack an infrared filter altogether. In their study, the researchers tested a flawed unit that releases nine times more infrared energy than green light. Normally this wouldn't be a concern — anyone who accidentally gets an eyeful of laser light will blink and recoil instinctively. However, shine this defective laser at a modern energy-saving window, and the infrared beam gets reflected back at you (or someone else nearby) even though the green light passes through.

I've seen some lasers powerful enough to burn a hole through a black plastic trash bag, and one dealer's website even touts the ability of its products to pops balloons, light matches, and set paper afire. I just checked my green laser, and it had no effect during an impromptu "trash-bag" test. So is it safe, at least from an infrared standpoint? Not necessarily, says Alessandro Restelli, one of the paper's authors. The filterless laser tested by the NIST team pumped out 20 milliwatts of infrared energy, not enough to pop a balloon but plenty strong enough to cause retinal damage. 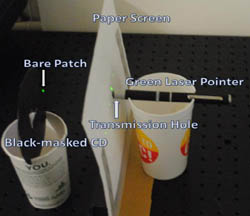 This simple setup can be used to test a green-light laser pointer for unwanted infrared emission. A bare spot on the surface of a CD (at left) serves as a diffraction grating that projects the laser's spectrum onto a sheet of paper. Click on the image for a larger view.

Nor does a weak beam mean you've got a stealth weapon in your hand. Restelli notes that many factors can influence green-light output strength, among them variations in the doped crystal, its operating temperature, optical alignment, and the quality of the surface coatings.

One way to ensure that your laser is free of spurious emission is to use the novel setup detailed in the NIST article and illustrated at right. By using a CD's surface as a diffraction grating, the green and infrared components can be separated. Your eye can't detect the diffracted peaks of infrared energy at 1064 nm shining on the paper screen, but a simple webcam that's had its infrared filter removed can. I encourage astronomy clubs to build one of these gizmos to test their members' laser pointers. Also, it'd be a good idea to give everyone a tutorial on how to use them safely.

Using the test apparatus above, your eyes see only the laser's green light. But an infrared-sensitive webcam reveals hotspots of dangerous invisible energy that could cause eye damage.

The lesson here is "buyer beware." If you're in the market for a green laser pointer, buy it from a reputable dealer who'll both certify the output wattage (lest you be disappointed with its performance) and insure that the unit is infrared free.

I'm eager to see more about the testing setup.

Some CamCorders have a night shot mode that removes the IR filter from in front of CCD. This might also work if you don't want to modify a webcam.

Not sure if your webcam is detecting infrared? Point a TV remote control at it and press the buttons. Unless you have one of the fancy RF remotes, they have IR LEDs in them. If your webcam (or cell phone camera) shows the blinking LEDs in the business end of the remote, it should detect the IR from the laser.

Thanks so much for your interest in this work. The link to the article was down briefly yesterday-our apologies--it should be back up at http://www.nist.gov/customcf/get_pdf.cfm?pub_id=906138 .
Also, yes, any camera device that operates without an IR filter should work in the test setup described in the paper.
Ben Stein, NIST Science Writer

Why the worry? People shouldn't be aiming GLPs at eyes, windows or anything but the sky, whether or not they have a IR filter.

Why worry? Easy - it's your burned out eye that results from an accidental sweep of a 100mw or greater laser (and some available lasewrs are approaching 1 WATT!). No matter how careful you are, accidents happen and the results in this case are tragic. My < 5mw version is perfectly suitable for star parties.

People had better be careful with their toys. Even "safe" ones are becoming an nuisance and being banned at some star patries. Thye are distracting and even shining on trees, etc interferes with photography and visual observations. I myself favor this or the alternative of providing for a special "time" slot for them to be used.

All of this is besides the paranoia shown by security agencies over the use of greeen and even red low-milliwatt laser pointers, whcih have already been completely banned in countries like England ans Australia.

Let there be no doubt - many think lasers are fun but there is no person who should consider them toys. Laser safety is such a new area that many jurisdictions have actually created laws, restrictions, and regulations with little, or worse, skewed knowledge on the subject. This creates several bad circumstances where laser enthusiasts become criminals and those who think they are criminals to want them - for all the wrong reasons. IR filtering is only one serious issue with 'on-shoring' of electronics and optics that are built without any regard for safety. Proper use and adherence to safety procedures is the only way lasers should be used. So even if you have a powerful laser, with or without filtering, rated or unrated, you should always know where you are pointing and the 'after shot' effect of that laser beam. Let's keep in mind that lasers fall into the category of directed energy devices and as such as governed under radiation laws - light radiation is not different than X-ray, UV, IR, or any other position on the electro-magnetic spectrum. Engage your laser supplier in a conversation (verbal or email) and see if they are willing to help you understand the laser world, or simply want to sell you a loaded weapon.

I agree with the comment made by Wally. In most cases the
use of these green lasers at star parties and public
outreach activities causes attendants to forget looking at the sky and center their attention in your "toy".
Sure, their next questions will be of this style: where did you purchase it? What is the price? and so on...
Regarding safety, we published recently an article (this is the link to the abstract:
http://journals.lww.com/optvissci/Abstract/2010/02000/Green_Laser_Pointers_for_Visual_Astronomy__How.12.aspx
Optometry and Vision Science, February 2010, Volume 87, Issue 2, pp 140-144) in which we showed that <5 mW green-laser pointers appear to be nice devices for pointing at the stars with enough visibility at safe power levels, against the increasing popular belief that "more power is best", a race pulled mainly by vendors (and some amateurs). And I am thinking seriously whether this would be just another kind of light pollution."

Last year a TV reporter asked me about a possible UFO sighting in our town. They forwarded me the pictures taken by local residents of what they saw. The images showed some wild wiggles of green light. I realized that they were the colors of a green light laser. Looking at the individual pixels in the .jpg, reading their numerical red-green-blue levels and comparing them to images of our own laser's light I made in our observatory, I found them to have matched each other.

I know that the atmosphere can refract the laser light if there was a cooler air mass near the ground and a warmer air mass above. So I almost can completely answer them, however, I can not figure out how the pointer could or would have been pointed the resident's way for as long as they did observe it (long enough to build up a crowd - at least 10-15 minutes according to the report) and longer as it probably running before the first resident noticed it.