How to Photograph the Transit of Venus

Find out how to get the best shots of the Sun during Venus's transit.

Skygazers across much of the globe are looking forward to the upcoming transit of Venus. Parts or all of the transit will be visible in most of the Western Hemisphere on June 5th and most of the Eastern Hemisphere on June 6th. If you're planning to photograph the transit, I strongly encourage you to use the next week or two to practice your technique, so you'll be ready to go when Venus crosses the Sun's fiery disk. Here are some pointers. 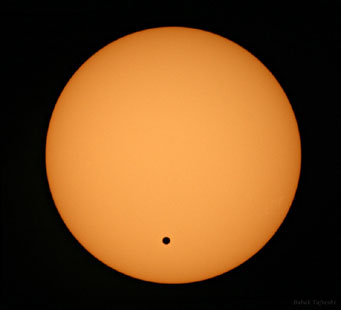 Venus last transited the Sun on June 8, 2004, and S&T contributing photographer Babak Tafreshi captured the event from southern Iran, near the tomb of Cyrus the Great, founder of the Persian Empire.

Submit your photos to our Photo Gallery.

Fortunately, you don't need to be a highly experienced astrophotographer to take great shots of the transit — taking outstanding pictures is relatively straightforward. First, make sure to bring some kind of safe solar filter to put at the front end of your camera lens or telescope, and make sure it's securely fastened. There are many different brands, but one that received very high marks in an S&T Test Report is the solar filter material from Baader. A good source for solar filter material in the U.S. is Astro-Physics. I recommend Density 5 Visual material because it's fine for photography and visual use. Avoid the temptation to stretch this material tightly over your lens — it works best when it appears a bit wrinkled.

Next, decide what kinds of shots you want to take. Do you want to take wide-field shots of the Sun that include some of the surrounding landscape? Or are you planning to zoom in on the Sun through a telescope? Take photos around the same time of the day that the transit will be visible from your location. If you're using a digital camera, make sure the batteries are fully charged and that you have lots of memory. Bring plenty of film if you prefer this older but still viable medium. 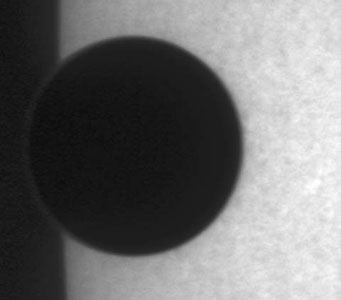 This close-up of Venus perching on the Sun's limb was shot using a webcam on a 16â€ Zeiss refractor, stopped to 12â€ with a solar filter. (The telescope sits on the roof of the Vatican Observatory in Castel Gondolfo, the Pope's summer residence.)

For wider-angle shots using only a camera lens, experiment shooting the Sun with different lenses, exposure lengths, and ISO settings. My guess is that you'll mainly want to use a telephoto lens. Adjust the focus until sunspots (an excellent proxy for Venus in transit) or the solar limb (the visible edge of the Sun) come into sharp view. Once you decide upon the best exposure length, set your camera to take a variety of exposures on either side of that (a technique known as bracketing).

For zoom-in shots of the transit with a telescope, you can use a scope with an effective focal length of up to 4,000 mm (13 feet) or more. Focus on sunspots or the solar limb until they appear as sharp as possible. Once you achieve optimum focus, use adhesive tape on the lens's focus ring or telescope focuser to prevent it from moving during the transit. (The same logic applies for camera zoom lenses.) But keep rechecking your focus as the transit progresses.

If you want to shoot video of the transit with the intention of stacking multiple images for the sharpest possible picture, I suggest recording only 10- to 20-second clips. Because Venus is visibly moving across the Sun throughout the transit, longer videos will blur the planet's dark silhouette or any solar details when you stack the individual frames. 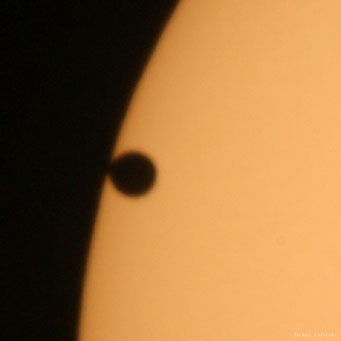 Try to use a portable mount that's easy to set up and break down in case you want to move during the event. Consider using rubberized footpads to dampen vibrations. To reduce shaking, operate the shutter lock-up feature with a long cable release or use the camera's delay timer. Try to find a location sheltered from the wind.

For observers in much of North America, the transit will last a little over 2 hours. Be prepared at the outset, since the most exciting time will be the first 18 minutes, when Venus makes first contact with the Sun's limb and begins to cross inside the solar disk. See if you can record the infamous black drop effect, or a ring of brightness around Venus's limb (an aureole) around ingress. And be ready to take pictures if Venus comes near any sunspots, since that should provide dramatic views. The planet's silhouette will be pitch black, providing interesting constrast with somewhat-brighter sunspots.

Finally, as you're shooting the transit, remember to take time to enjoy it with your own eyes. The next transit of Venus occurs on December 11, 2117. I don't know about you, but I don't expect to be alive on that momentous day 105½ years from now. Unless modern medicine comes up with a miracle in the next few decades, this will be your final opportunity to enjoy one of nature's rarest spectacles.

I don't have a good solar filter to watch the transit of Venus, but I have a good pair of binoculars that I might be able to use to project the Sun onto paper. I'm just wondering if doing that would be bad for the lenses and the lens coatings of the binoculars. Can anyone answer this question? Thanks.

Hi Leah,
I've used binoculars for projection since long and have not noticed any problem with the optics or the frame.
The rays do not come to focus on anything inside the binoculars. If you take care to have the image big enough (for which you are using the projection) then it is pretty safe. In absence of any auto tracking, you'll have to keep tracking the binoculars manually.
If the inside of the binoculars is metal or sturdy plastic, the shifted focus of the sun made by the objective when you leave the binoculars unattended may be a concern. However, I haven't had any problems since past 25 yrs that I've used mine despite leaving it unattended.
Mr. Magan

How about a pin-hole camera of the type we use to observe solar eclipses? I mean a cardboard box with a pin-hole in one end and a white paper sheet on the inside of the other. Will that work for the Venusian Transit?

Captmark97~ In principle a pin-hole camera will work, but lacking optics to magnify the projected image, the size of Venus will be likely too small to see well. Venus is ~1 arcminute in angular extent, so to see it at 1/16" in diameter, a distance between the pin hole and screen would need to be about 18 feet! The sun's diameter would then be 1.9 inches. Whereas using binoculars (or telescope), the image size increases by the magnification. For binoculars with 8x magnification, the sun would be about 4" diameter at a projection distance of 5 feet.

CAUTION: With any optical instrument, VIEW THE SUN IN PROJECTION MODE ONLY! Unless you have the proper/certified solar filter(s)(as disussed in the article), NEVER view the sun directly.

Hey! I'm new to astrophotography and thank you very much for posting this, just quick question if you don't mind. I'd like to try to capture the Venus transit with my DSLR camera and telescope, but since a solar lens for a telescope is a little expensive, and unfortunately I can't find it anywhere that it isn't sold out, would it be safe for me, my telescope, and the lens to just try and search for a solar lens just for my camera? Also, who would you suggest sells such a lens and what would be best? Thank you very much again!

These are really useful tips. I need to bookmark this site for my future plan. Great work

these are really some useful tips. I needed for future