Observers of historical transits of Venus have observed the black drop effect — but will you? 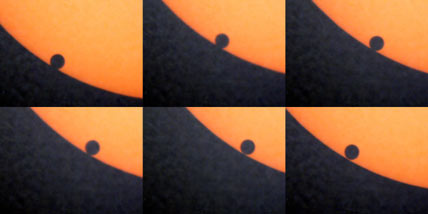 This series of images shot from Singapore shows the possibility of a black-drop effect.

After the 2004 transit of Venus, observers were puzzled by the appearance (or lack thereof) of the black-drop effect, the dark patch that appears to connect Venus with the dark sky past the edge of the Sun, sometimes giving Venus a teardrop shape. The black drop was widely observed and commented on in the 18th and 19th centuries. So why, in 2004, did some people not see it at all? 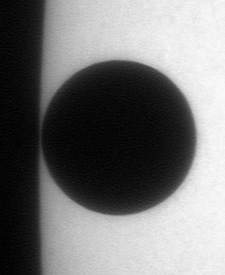 Three webcam images were combined to reveal the moment of second contact. This image was taken through the 16-inch f/16 refractor at the Vatican Observatory at the Pope's summer residence at Castel Gandolfo, Italy.

Opinions range as to why there is a discrepancy. The leading theory cites today's better telescope quality. Unusually good atmospheric seeing has also been suggested.

Lorenzo Comolli watched the transit from outside Milan, Italy, in 2004 with an 8-inch Schmidt-Cassegrain and reported seeing the black drop at egress but not at ingress. At ingress, he said, "Because the seeing was quite good, I've not seen the black drop. The entrance of the disk was very sharp." At egress, under worse seeing conditions, "the black drop was evident, especially in the worst seeing moments."

S&T contributing editor Govert Schilling, who watched the 2004 transit from Utrecht, The Netherlands, remarks: "When looking at ingress with a pair of binoculars, I thought I could see something that you might call a black drop effect, but looking through larger instruments (of the Sonnenborgh Observatory), nothing like a black drop was seen." 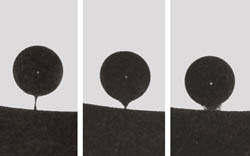 Australian watchmaker F. Allerding recorded the “black-drop” effect as the silhouette of Venus prepared to exit the Sun”™s disk on December 9, 1874. He observed through a 3½-inch refractor.

Some pictures of the 2004 transit show contact points with no hint of black drop whatsoever (see image above). Others show a slightly darker, fuzzy patch between Venus and the edge of the Sun at ingress or egress that does not actually distort the planet's apparent disk. Few show the pronounced teardrop shape in reports from past centuries.

"Some of it may be a matter of degree," says Jay Pasachoff (Williams College). He says his study with Glenn Schneider (University of Arizona) of space-based images of the 1999 and 2003 Mercury transits shows that the telescope's optics and resolving power are a factor in the black-drop effect. But they discovered that the Sun's limb darkening — the fact that the Sun's edge is darker than its center — is another important contributor. "So it's not a surprise that big telescopes that have a better point-spread function don't show a black drop effect."

During the 2004 transit of Venus, Pasachoff and Schneider studied images from the Transition Region and Coronal Explorer (TRACE) satellite to try to better understand the effect. The conclusions they drew from observing the transits of Mercury held up.

More importantly, during the 2004 transit, Venus's atmosphere became visible while Venus was only about half onto the Sun's disk, and the same was true as Venus exited the Sun's disk. Studies of Venus's atmosphere will be the centerpiece of Pasachoff and Schneider's studies as they observe the 2012 transit with a variety of telescopes on the ground — especially from the Haleakala Observatory in Hawaii and the Sacramento Peak Observatory in New Mexico — and in space — with the Solar Dynamics Observatory, Hinode, ACRIMsat, and SORCE spacecraft.

So the "black-drop effect" remains as enigmatic in the 21st century as in the 19th. When you observe the transit on June 5th-6th, 2012, be on the look out for the black drop. Just be aware that if your telescope and seeing are too good (too good — what a concept!) then you may not see the effect.