If you're in eastern North America, everything's in place for a fine display of the Quadrantid meteor shower overhead late on the night of January 3–4.

The Quadrantids are brief but intense — in some years observers with dark Moonless skies have seen 100 or more meteors per hour. But this peak activity lasts just a few hours. 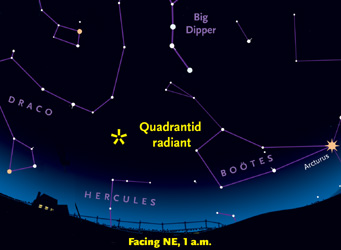 The Quadrantid meteors appear to radiate from the location of Quadrans Muralis, a defunct constellation that is now part of Boötes.

The shower's name derives from the location of its radiant point in a now-defunct constellation called Quadrans Muralis, which was between the handle-end of the Big Dipper and the head of Draco.

This year the International Meteor Organization predicts that the peak will center around 6:40 Universal Time on January 4th, which is 1:40 a.m. Eastern Standard Time. This timing is fairly good for the Eastern time zone, when the radiant will be up in the northeast, though not yet very high.

The farther north and east you are the better. To the south and west the radiant will be lower at that time and, therefore, the meteors will be fewer. But the shower could continue later into the night as the radiant rises higher. Great Britain has a good window before the first light of dawn, when the radiant will be very high.

The Moon is a thick waning crescent. It won't rise until an hour or two before dawn's first light and will light the sky only a little even then.

Bundle up even more warmly than you expect to need! You'll be out at the coldest hour of night in the coldest month, lying motionless on your back, watching a clear, open sky that allows radiational cooling. An insulating ground pad, sleeping bag, and electric hot pads will help. Even in your backyard, treat this as an adventure to plan for.