Right now the planet Jupiter is oriented such that its equator and the orbits of its four big moons are almost exactly edge-on to the Sun and Earth. This alignment happens every six years, on opposite sides of Jupiter's 12-year orbit around the Sun.

At such times its four Galilean satellites undergo mutual phenomena: they often get occulted and eclipsed not just by big Jupiter and its shadow but also by one another. Amateur Christopher Go recently recorded a striking example of the latter.

During a mutual occultation, for example, you can watch two satellites appear to merge and, in the middle of the merger, slightly dim. During an eclipse, a lone moon fades and rebrightens as it's crossed by the shadow of one of its siblings.

Although these little encounters are great fun simply to watch, anyone who records their light curves accurately with a photometer can help to refine the satellites' orbits.

Listed below are the mutual occultations and moderately deep eclipses through the end of 2009, when you'll find Jupiter conveniently placed for viewing in the evening sky. (Thanks to Belgian astro-calculator Jean Meeus for providing the list!) 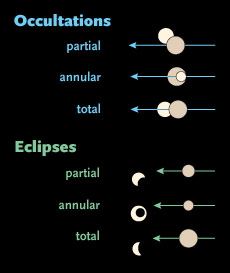 Mutual events among satellites can occur six different ways, depending on differences in the moons' sizes and relative positions.

Events are listed by their date and Universal Time, which is 4 hours ahead of Eastern Daylight Time. The next column tells which satellite occults (o) or eclipses (e) another. For example, 4o3 means that satellite IV (Callisto) occults satellite III (Ganymede) by passing in front of it. Similarly, 1e2 means that satellite I (Io) casts its shadow onto satellite II (Europa). Sometime these notations are followed by A for annular or T for total; otherwise the event is partial. The six possibilities are shown schematically here.

Event size indicates how much of the more distant satellite's diameter is obscured during an occultation, measured as the percentage drop in its light. The table lists only those events for which the dropoff is at least 25% (0.3 magnitude).

Although this table lists only those events easily observable from North America, Sky & Telescope has prepared a comprehensive tabulation of all pairings for the entire year. So find the events that occur at night for you when Jupiter is up, and mark your calendar!