In 1987, when an exploding star erupted to eyeball visibility in the far-southern constellation of Dorado, northern skygazers could only wistfully imagine how it must have looked. 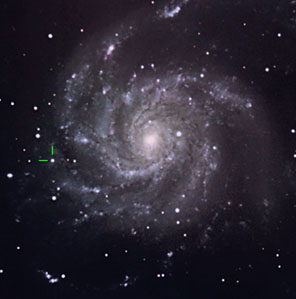 Observing from Puerto Rico with a 12-inch telescope, Efrain Morales Rivera captured the supernova in M101 on August 29th, when the outburst was roughly 11th magnitude. Rivera submitted this image to our online Image Gallery; click here for a larger view.


Efrain Morales Rivera
Now they've gained some measure of redemption, thanks to a remarkable and relatively bright stellar detonation in M101, sometimes called the Pinwheel Galaxy, poised near the Big Dipper's handle. Although only 17th magnitude when discovered on August 24th, Supernova 2011fe was just beginning its performance.

Right now it's fading slowly from a peak brightness of 9.9, where it remained for nearly a week. But the stellar outburst is still 10th magnitude, and, with intrusive moonlight gone from the early-evening sky, the next few nights offer your best chance to spot it.

In a light-polluted sky the star is much easier to see than M101 itself. The face-on spiral galaxy is large but dim and is easily wiped out by skyglow. If you've got a dark enough sky, M101 makes a nearly equilateral triangle in a finderscope with Alkaid and Mizar, the final two stars in the Big Dipper's handle. 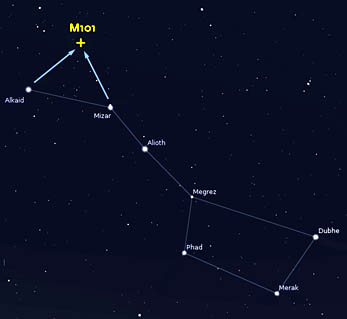 The face-on spiral galaxy Messier 101 (M101) sits above the Big Dipper's handle, forming an equilateral triangle with the stars Alkaid and Mizar.

To identify which tiny speck is the supernova, use the comparison-star charts that you can generate courtesy of the American Association of Variable Star Observers. Enter the star name SN 2011fe, and choose the "predefined chart scales" A, B, and C. Print out all three. The two brightest stars on the "A" chart are the last two in the the Big Dipper's handle.

The supernova is easy to spot in a 4- or 6-inch telescope. Although it looks like any ordinary star, it's thousands of times more distant than any other that's visible in amateur telescopes from northern latitudes. (M101 is about 23 million light-years away.) In fact, you might even pick it up through big, mounted binoculars. "I was able to clearly see SN 2011fe in M101 using mounted 16×60 Pentax binoculars on September 3rd," reports Colorado amateur Mike Prochoda. 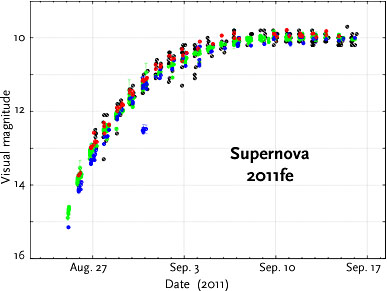 More than 1,400 observations from members of the American Association of Variable Star Observers show that the dramatic rise in brightness of Supernova 2011fe peaked about September 10th.

According to Matthew Templeton, science director for the American Association of Variable Star Observers, SN 2011fe has been a huge hit with its worldwide team of observers: 1,432 observations to date by 117 observers. (One especially prolific member in Spain has submitted more than 500 CCD observations!). "Our main science plan is simply to make sure the light curve is as well-covered and accurate as possible," Templeton explains, "so that the data will be available and useful to the science community."

Meanwhile, SN 2011fe's early detection and its relative nearness have drawn plenty of interest from professional astronomers. Being a Type Ia supernova (the complete thermonuclear explosion of a white-dwarf star in a binary system), this one is getting special research attention — because Type Ia blasts tend to have the same intrinsic brightness and thus serve as uniform "standard candles" for telling distances all across the far universe.

Only rarely, once every couple of decades, do we get one to study in close detail right in our cosmic backyard. "A bright supernova lets you use instruments that don't ordinarily get enough photons," notes Robert Kirshner (Harvard-Smithsonian Center for Astrophysics). "Polarimetry and high-dispersion spectra (to look for gas in the vicinity, along the line of sight in the host galaxy, and in the high-latitude zones of the Milky Way) are good possibilities."

Kirshner adds, "We're especially keen to get good series of infrared spectra, because Type Ia supernovae are better standard candles in the infrared."

Caltech astronomer Richard Ellis says that the Hubble Space Telescope has been tracking the development of SN 2011fe. "We have a regular 'Target of Opportunity' program for nearby Type Ia supernovae," he explains. "We are gathering ultraviolet spectra in a sequence starting from a couple of days after explosion through maximum light and beyond."

Interestingly, no one has been able to identify the star that blew up. Careful searching of archived HST images by Weidong Li (University of California, Berkeley) and others — nor was an X-ray signature evident in before-the-blast observations from the Swift and Chandra spacecraft. So astronomers will have to dig deeper if they hope to determine whether the companion of the now-obliterated white dwarf was a red-giant star, a main-sequence star, or another white dwarf.

I was able to observe the supernova in M101 in the dark skies north of Two Harbors, Minnesota, on the evening of 24 September. Using a 4.25" reflector at 40X, the 10th magnitude supernova appeared superimposed on the irregular smudge of light of the galaxy, despite the object being only 30 degrees above the horizon.

You really should read your copy before forwarding it to Sky and Telescope. The second sentence of the last paragraph in the above story just doesn't make sense. You should think more of your professionalism as a writer and science educator than this.

I wish the best for you in the future.

Not All Star-forming Clouds Are The Same