Like many of you, I was curious to see last month's "super Moon" — when the Moon became full within an hour of its orbital perigee. The numbers told me that its diameter would be about 14% greater than it is at apogee and consequently look about 30% bigger by area. Technically, though not by much, it was the closest and biggest full Moon in 18 years.

As it turned out, the full Moon happened during the busiest part of Sky & Telescope's editorial cycle; my colleagues and I were in the final stages of readying the June issue for the printer. But that evening was superbly clear in Boston, and I figured I really needed to take time to record the moonrise. 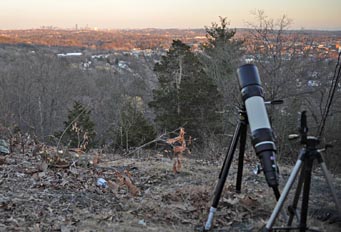 Dennis di Cicco picked this spot, about 10 miles from downtown Boston (along horizon at upper left) to record the rising full Moon on March 19, 2011. His Tele Vue NP-101 telescope and Nikon D700 camera are at lower right.

I have several favored locations for shooting astronomical events above the Boston skyline, but it was a rather last-minute decision to use Prospect Hill in Waltham. This location has several good viewing spots, and I decided to set up at the base of the radio tower. Since the access road is gated in the winter, I walked from the parking lot. Reaching my spot, I had a commanding view of the city skyline about 10 miles away. Luckily, someone had recently cleared brush from around the radio tower (probably a "fire" thing), which made it a lot easier to find a viewing spot low to the ground and away from the guy wires for the tower.

My setup consisted of a Nikon D700 camera body set at ISO 200. The “lens” was a Tele Vue NP-101 refracting telescope — effectively a superbly sharp 540-mm f/5.4 “telephoto” lens. I used a handful of the D700’s features: live focus, shutter delay, auto-bracketing, matrix metering, and auto white balance, to name a few. To improve stability, I put a clamshell ring on the telescope's front end and attached that to one tripod, then put the camera body on a second tripod.

Then I waited in the gathering darkness. While I have the ability to calculate the precise location of the rising Sun and Moon from a given spot, the last-minute nature of this photo shoot ruled out doing the math. I did know that the Moon would rise behind the “interesting” part of the skyline, but not exactly behind which features.

Distorted by atmospheric refraction, the full Moon rose big and bright over the Boston skyline on March 19, 2011. To its left is the control tower for Logan International Airport, and to its right is the city's iconic Zakim-Bunker Hill Bridge. Click here for a larger view.

The full Moon rose along the distant horizon, its shape grossly distorted by atmospheric refraction. Just to the left of the orange lunar disk is the distinctive control tower at Boston's Logan International Airport. To its right, topped by lights, are the tall, twin towers of the cable-stayed Zakim-Bunker Hill Bridge that spans the Charles River near its mouth.

Well, despite the last-minute preparations, it all worked. My photograph was eagerly shown by several Boston television stations and on the Boston Globe’s website. On March 24th, it was NASA’s "Astronomy Picture of the Day." Thanks to all of you who sent me messages and kind comments about the photograph.

A final thought: If you managed to miss March's perigee full Moon, you won't have to wait too long for another chance. It'll again become this large and bright next year on May 6th, when full Moon falls within only a few minutes of lunar perigee.

"Super moon".... Et tu, brute?? oh well... In any case, if anyone's interested in more "large full moon" photography opportunities --but sorry, no goofy Internet-hype-- the Moon will be the same size very nearly THIS MONTH when it's full on April 18. The Moon will be nearly at perigee and nearly as close as it was in March. The difference in apparent diameter will be less than 1% compared to the so-called "super moon" or in angular terms, only about two-tenths of a minute of arc smaller, depending on when you count it from. That difference in apparent diameter is less than the augmentation --the increase in the Moon's diameter at higher altitudes above the horizon. So depending on where you are on the Earth and whether you see the Moon rising, when it's SMALLER, of high in the sky when it's larger, you could actually see a larger Full Moon on April 18 than others saw on March 19. ..... Congratulations, by the way, on a perfect geometry for this unplanned photo. This one will get you fleeting fame in some ephemeral circles, but that fine analemma from some thirty years ago will stand the test of time... I showed it to two classes in the past three weeks.

no self-aggrandizing, condescending snobbery with THIS comment - great pix, guys. I'm glad the weather held up for your quick departure from the busy editorial world.

I was much happier back when you seemed to ignore all this hype about nothing.

A belated comment--I saw the same moonrise from Peters Hill in the Arboretum, looking just like your photo, although not in front of downtown from that vantage point. I loved the picture and put it on my desktop. When I showed it to my my very smart assistant, she stated that the background had been photoshopped in, and nothing I could say could convince her otherwise!