Mercury is putting in its best evening appearance of the year for mid-northern skywatchers.

An old legend, almost certainly false, is that Copernicus never saw the planet Mercury. It's easy to see how the story took hold. Nicolas Copernicus was mostly an indoor astronomer, wrestling with math and generally using other astronomers' observations to work out his revolutionary model of the solar system. But at his northerly latitude on the shore of the Baltic Sea, amid the local fogs and mists that he often complained about, the closest planet to the Sun may indeed have been an unusual sighting. 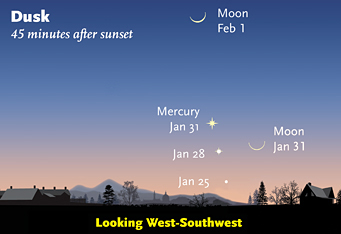 Mercury's position in the twilights of late January.

Mercury is in fact the last bright planet that many skywatchers identify. It spends most of the time deep in the glow of sunset or sunrise. But now is different. Mercury has come out of hiding to put on perhaps its clearest show of the year for mid-northern viewers. It will be at its best from about January 24th to February 4th. It will appear highest on January 31st (if you're near 40° north latitude), more than 10° above the west-southwestern horizon a half hour after sunset and setting only as the sky grows fully dark.

To see Mercury, go out shortly after sunset to a spot with a good view toward west. The planet should glimmer into view within a half hour after sunset. It will appear to brighten as the sky darkens. But if you’re using a telescope, try to view Mercury as soon as you can find it, before it gets too low and fuzzy in the thick atmosphere near the horizon. Mercury’s disk will be gibbous at first, half lit on January 31st, and a thick crescent in early February.

Should you miss the planet during this apparition, it will put on another good evening show in late May, low in the west-northwest with Jupiter above it.

I certainly can believe old Nick didn't ever get to see Mercury...here in Metro NYC it sure is difficult to see too.
But when viewed, Mercury has an awesome color. It is BROWN. brown brown brown. just fabulous. In fact, our orbiter could not penetrate the thickness of the dirt with spectroscopic analysis of the rock beneath. and to see Fomahault too is really cool, because how many times Fomahault has fooled me, astonished me, as well. ah, the pleasures of the skywatchers!

My first spotting of Mercury for this elongation was on January 18, 2014, with 10x42 binoculars from the NJ suburbs of Philadelphia. On January 22nd, I was able to see Mercury without optical aid after finding it with the binoculars, and last night, January 24th, I initially found it without optical aid. This marks the twentieth (20th) elongation in a row that I've seen Mercury (with or without optical aid), so I don't think it’s all that hard to do. You just need some determination and a little preparation. Mercury has never appeared brown to me. Mainly, it looks "white," although it does become a bit ruddy (due to atmospheric absorption) when it's really close to the horizon.

That's all good and well if you live at 40 deg latitude. However, the further north you live, the more difficult it becomes to see Mercury. That's all down to basic geometry: the angle the ecliptic makes with the local horizon becomes smaller the further north you go. And you will no doubt know that it depends on the season as well; during spring the ecliptic makes a steeper angle with the horizon (at sunset) than during autumn. So from my northern English latitude the current apparition of Mercury is quite favourable (however, if current weather patterns persist I am unlikely to see it), whereas September's apparition is not: even at greatest elongation Mercury will be less than 2 degrees above the horizon at sunset, i.e. totally invisible! Which is not to say that it can never be done of course, it's just not as easy as you make it out to be.