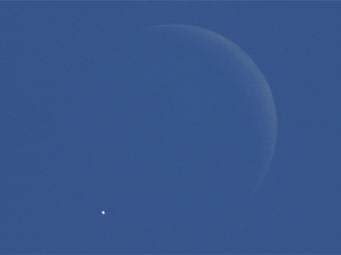 The thin waning crescent Moon occults (covers) Venus during daylight on March 5, 2008, for central and western North America and Mexico. The bright little planet will disappear behind the Moon's bright edge (which may be invisible in the blue sky) and will reappear from behind the Moon's dark edge.

But "bright" is altogether the wrong word for any part of such a thin Moon (only 5% illuminated!) in the daytime sky. The Moon will be just 25° from the Sun, and lower than the Sun to boot. Venus, with its higher surface brightness, is surely what you'll notice in your telescope or finderscope first.

For the times of Venus's disappearance and reappeance as seen from your area, see the tables of predictions for hundreds of cities and towns prepared by the International Occultation Timing Association.

In the tables, the time of each event is given in Universal Time in hours, minutes, and seconds. To get Eastern Standard Time subtract 5 hours from this; for CST subtract 6 hours; for MST subtract 7 hours; for PST subtract 8 hours. The tables also give the altitudes of the Sun and Venus above your horizon at the time of the event (in degrees), and the azimuth of Venus: the compass direction around your horizon, counting eastward from true north. (Azimuth 270° is true west.) These directions will help a lot in finding Venus. In fact, if your sky is not crystal-clear blue, you may miss the Moon altogether even in a telescope!

It looks like during the dawn, Mercury and Neptune will be in the area, too. I doubt I can catch Neptune in those conditions, but it would be fun to spy the two inferior orbit planets riding along with Luna.

And here's a special challenge for those who live near Los Angeles and would like to witness a grazing occultation of Venus. The northern graze path will sweep in a northeasterly direction from Topanga State Park through Palmdale to Lockhart.

Below is my algorithm for the northern graze path which passes slightly to the north of Los Angeles. It is only good between western longitudes 117.3° and 118.7°. Input and output are all decimal. A Western Longitude is the only input. The hour is in Pacific Standard Time. The Zenith Angle is the position of Venus on the lunar limb measured counterclockwise from the zenith.

I’ve created a North American graze map, also preview graphics and data for the location of Chicago’s Adler Planetarium. They can be seen at: http://www.CurtRenz.com/astronomical.html

I thought I noticed that while checking this over in my Starry Night software. I'll be watching from Boulder City, Nevada, so this should be a nice added bonus for me.

There is a mild Santa Ana wind condition producing clear, high transparency skies. In spite of that and the excellent directions I wasn't able to spot the crescent moon or Venus in 8x42 binoculars. Lesson learned - set up one of the goto scopes the night before. Discovery - there's an amazing number of plastic grocery bags that fly over Los Angeles at high altitude during Santa Ana wind conditions.

How Dark Are Your Skies?