On Friday night, September 19–20, observers in northeastern North America, eastern Canada, and western Europe have a fine chance to watch the Moon cover up stars in the Pleiades. 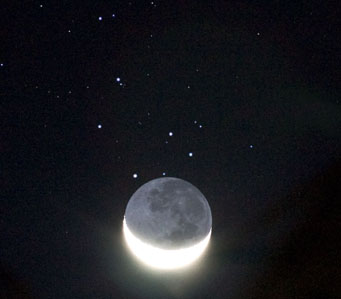 When Stan Richard took this photo in April, 2006, the Moon's bright and dark portions were almost opposite from what they will be on September 19-20, 2008. Click above for a larger image.

For North Americans, the action comes on the evening of the 19th with the Moon low in the east-northeast. For Europe the occultations take place high in the sky before or during dawn on the 20th. The Moon will be waning gibbous (73% illuminated). This means that stars will disappear behind its bright limb, where you’ll need a telescope to watch them go, and will reappear from behind the Moon’s dark limb, where binoculars might suffice.