Alfredo Jose Serra Pereira of Carnaxide, Portugal, has discovered a nova in the constellation Puppis during a visual search with 14 × 100 binoculars. He spotted the new star on Nov. 14, 2007, near 5:30 Universal Time and estimated its magnitude as 7.0. Within a few hours, James McGaha in Arizona and James Young in California carefully measured the nova's position, describing it as about magnitude 6.4. 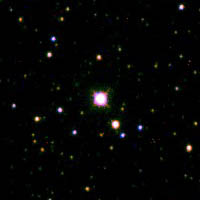 Nova Puppis 2007, at center, had a visual magnitude of about 7½ when this composite image was taken on the morning of November 15, 2007, with a 10-inch f/3.4 Takahashi refractor and CCD camera. The area shown is 7′ square.

Nova Puppis 2007 can be found about 1° northeast of RS Puppis, a Cepheid variable star. The nova's 2000.0 coordinates are right ascension 8h 16.3m, declination –34° 15′. Its type is not yet known, nor whether it is still brightening or beginning to fade.

Full details of the discovery are on IAU Circular 8895, available by subscription from the Central Bureau for Astronomical Telegrams in Cambridge, Massachusetts. More information can also be found on Alert Notice 362 of the American Association of Variable Star Observers.

The AAVSO website provides a wealth of guidelines for amateurs who wish to get involved in making and submitting magnitude estimates of variable stars and novae.