Mars is making its closest approach to Earth since 2005. If you have a telescope, you’ll want to make the most of the opportunity in December and January. It’ll be a long time before we get another chance this good. 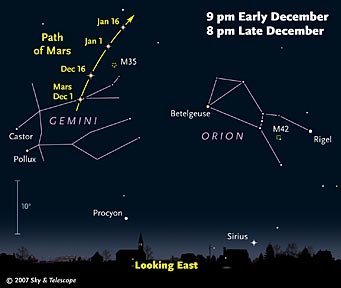 Mars rises around the same time as Orion, but it looks best through a telescope later when it's high in the sky. In late December, the Red Planet passes near the fine open cluster Messier 35. Click image for a larger view.

Not often do we get a close look at Mars. It’s a small world to begin with, about half the diameter of Earth, and it spends most of the time far away on the other side of its orbit from us. Mars usually ranks as one of the most disappointing objects in amateur astronomy — a tiny, featureless orange blob. The only time we get a decent look at its surface markings, clouds, dust storms, and changing polar caps is for a couple of months every two years, when Mars comes closest (around its date of opposition).

This time around, Mars maxes out at 15.9 arcseconds when it passes closest to Earth on December 18th. That's nowhere near its record-breaking apparent diameter of 25.1" in August 2003. Even so, it's bigger than Mars will appear again until 2016.

But there’s good news too. This year’s observing season finds Mars riding the northernmost part of the ecliptic, in Gemini and Taurus above Orion. This means it passes very high overhead every night for observers at mid-northern latitudes — high above the thick layers of air and poor atmospheric seeing that troubled northern observers during the previous few close-ups.

This is an abridged version of an article that appears in the November Sky & Telescope, page 67. Click here to download a printable version of the original story, or visit your local library. 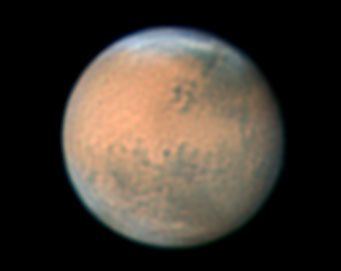 The Martian North Polar Hood of clouds (top) is thinning and breaking up on schedule. Meanwhile, morning clouds are appearing on the planet's following limb (left here). S&T's Sean Walker took this image at on the evening of December 8th.

To both casual and serious observers, Mars offers challenges and, with a little luck, delights. In a high-quality 4- or 6-inch telescope on a night of excellent steady air, you may be able to make out the north polar cloud hood, dark surface markings (depending on which side of Mars is facing Earth at the time), limb hazes, occasional scattered white clouds, and possibly the bright patch of a fresh dust storm moving from day to day.

But Mars is never easy to study visually; every bit of what you see is a hard-won prize. Don’t expect impressive views unless you have a large scope with first-rate optics in perfect collimation (optical alignment). Even then the limiting factor is usually Earth’s atmosphere. Studying the planets means spending a lot of time watching and waiting for glimpses of detail when the seeing steadies. Moreover, the longer you watch, the more familiar with the scene and the better trained your eye becomes. Plan to spend lots of time at the eyepiece.

Color filters are a useful aid. They improve the delicate contrast of Martian features and sometimes help in diagnosing their nature. Red and orange filters show Mars’s surface markings best and may also steady the seeing slightly. As you move away from the red end of the spectrum toward the blue, you see less of the surface and more of the Martian atmosphere and clouds.

Which Side Are You Looking At?

It’s one thing to detect a tiny, vague smudge on a small, shimmering disk. But the smudge becomes much more exciting if you can identify and name it. To find out which features on Mars are visible at a particular date and time, use our handy Mars Profiler.

The Martian day is just 40 minutes longer than Earth's, so if you look at the planet at the same time on two successive nights, you'll see nearly the same features. To see other parts of Mars, you must view at a different time of night or wait for a week or more to pass.

We see Mars nearly equator-on this season. The south polar cap has been shrinking in the southern hemisphere’s summer. That, combined with the planet’s slight tilt, will probably make the cap undetectable. In contrast, the wintry north polar cloud hood was large in November. Watch for it to start breaking up in December with the coming of northern-hemisphere spring — perhaps revealing the smaller, brighter north polar cap on the surface underneath the clouds.

The Martian surface markings — the dark “maria” and bright “terrae” picturesquely named by Mars mappers more than a century ago — are merely differences in the albedo, or reflectivity, of the surface rock, sand, and dust. Windstorms sometimes move the dust, resulting in both seasonal and long-term changes.

Syrtis Major, the planet’s most prominent dark marking, has undergone a dramatic widening since the 1950s. It has also shown seasonal variations in its breadth: widest during the southern hemisphere’s mid-winter and narrowest during southern summer (the season currently).

The area around Solis Lacus, sometimes called the “Eye of Mars,” is notorious for undergoing major changes. So is the Trivium-Cerberus area on the rim of Elysium.

The Martian atmosphere is ever-changing. White water-ice clouds, yellowish dust clouds, bluish limb hazes, and bright surface frosts have been studied from Earth with increasing interest in recent decades. The amount of cloudiness seems related to the seasonal sublimation of polar ice into the atmosphere, especially from the northern cap. The Mars Section of the Association of Lunar and Planetary Observers (ALPO) has found that clouds and surface fogs are more abundant during the spring and summer of the northern hemisphere. So this time around, we may see little cloud activity until perhaps February.

... according to Amazon.com that planet is not mars, but is actually Saturn!

Haha, Jason, you revealed something really funny to us. I just hope that no people are fooled by it.