Much of the world will experience at least a partial eclipse of the Sun on Sunday November 3rd. If you're near North America's Eastern Seaboard, catch it in progress at sunrise. 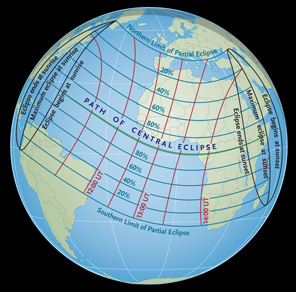 The solar eclipse on November 3, 2013, begins annular (the far-left end of the central green line) but quickly becomes total as the Moon's umbra crosses the Atlantic Ocean, then central Africa. The eclipse is partial over a much wider region, as mapped by the grid. For your location, interpolate between the red lines to find the Universal Time of maximum eclipse, and between the blue lines for the fraction of the Sun's diameter that will be covered at that time. Click image for larger view.

On Sunday morning November 3rd, early risers in much of eastern North America can witness a dramatic celestial spectacle, weather permitting. The Sun will rise while it's in the midst of a partial eclipse.

The eclipse will be total only along a narrow path crossing the Atlantic Ocean and equatorial Africa (and it’s annular for the first tiny bit on the Atlantic). A much larger part of the world will see a partial eclipse — including most of Africa, the Middle East, southernmost Europe, northern South America, and the Caribbean.

From the eastern U.S. and Canada, the viewing will be tricky but potentially spectacular. You’ll need an open view of the eastern horizon, and the farther east you are the better. For viewers near the East Coast, the Sun will rise with a big bite missing from its bottom, as shown below. This is the silhouette of the new Moon just as the Moon is beginning its new monthly traverse around the sky. The illustration shows the scene just after sunrise for selected cities. 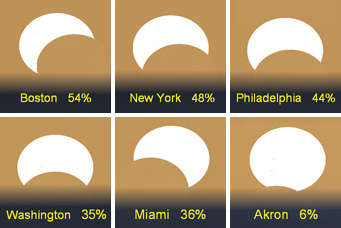 Weather permitting, early risers near the Eastern Seaboard can see a partial solar eclipse in progress at sunrise on November 3, 2013. The percents tell how much of the Sun's area is covered by the Moon's silhouette just after sunrise.

As the Moon moves along its orbit, the bite will diminish and then disappear (in well under an hour), while the Sun climbs higher.

Seen from farther inland, the Sun will rise with only a small nick that lasts for a short time. The western limit of the event's visibility runs through southern Ontario, Ohio, Kentucky, Tennessee, Alabama, and the Florida Panhandle — and that’s only if you have a very flat horizon. (The statement in the November Sky & Telescope said that even the East Coast will just see a small nick was mistaken; that only applies farther inland or if you don’t have a low eastern horizon.)

You can find your local sunrise time November 3rd by putting your location into our online almanac; if you’ve just gone off daylight saving time like most of North America, make sure the Daylight Saving Time box is unchecked!

Occasionally the rising or setting Sun is reddened and dimmed enough to be viewed directly — but usually it’s not. Bring a safe solar filter to protect your eyes from possible permanent injury, including by invisible infrared light. This is especially important if you’re using optical aid. Always use a proper solar filter when looking at the bright Sun, whether during a partial eclipse or at any other time. Sky & Telescope offers tips for observing the Sun safely.

If you want to take good pictures, use a telephoto lens (100- to 500-mm focal length) to enlarge the Sun to a reasonable size while including some nice foreground.

Here’s more about the eclipse as seen along its path of annularity-totality.

Cartographer Michael Zeiler presents detailed maps and graphical information on his website. In particular, see his diagram of how the rising Sun will appear as seen from many more cities.

Here is Fred Espenak's timetable of the eclipse for many locations.

What should I do if the sun is dimmed enough by passing through so much atmosphere and haze so it won't show up through my solar filter on my telescope, but it's too bright to view without it?
I missed the last transit of Mercury because I couldn't see the sun when I used the solar filter. Mercury was too small to be seen with projection, which at least this time shouldn't be a problem, since I'll want to see the shape of the sun itself, not a feature on the sun?

The clouds blocked out the sun at sunrise this morning. There was an opening below the clouds an hour before, but it closed up. See bkellysky.wordpress.com for the pretty, but sun-less sunrise on the east shore of Westchester County, New York.